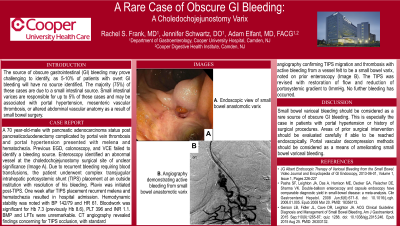 Introduction: The source of obscure gastrointestinal (GI) bleeding may prove challenging to identify as 5-10% of patients with overt GI bleeding will have no source identified. The majority (75%) of these cases are due to a small intestinal source. Small intestinal varices are responsible for up to 5% of these cases and may be associated with portal hypertension, mesenteric vascular thrombosis, or altered abdominal vascular anatomy as a result of small bowel surgery.

Case Description/Methods: A 70 year-old-male pancreatic adenocarcinoma status post pancreaticoduodenectomy complicated by portal vein thrombosis and portal hypertension presented with melena and hematochezia. Previous EGD, colonoscopy, and VCE failed to identify a bleeding source. Enteroscopy identified an abnormal vessel at the choledochojejunostomy of unclear significance (Image A). Due to recurrent bleeding requiring blood transfusions, the patient underwent complex transjugular intrahepatic portosystemic shunt (TIPS) placement at an outside institution with resolution of his bleeding. Plavix was initiated post-TIPS. One week after TIPS placement recurrent melena and hematochezia resulted in hospital admission. Hemodynamic stability was noted with BP 142/79 and HR 61. Bloodwork was significant for Hb 7.3 (previously Hb 8.6), PLT 396 and INR 1.1. BMP and LFTs were unremarkable. CT angiography revealed findings concerning for TIPS occlusion with standard angiography confirming TIPS migration and thrombosis with active bleeding from a vessel felt to be a small bowel varix noted on prior enteroscopy (Image B). The TIPS was revised with restoration of flow and reduction of portosystemic gradient to 0mmHg. There has been no further bleeding.

Discussion: Small bowel variceal bleeding should be considered as a rare source of obscure GI bleeding. This is especially the case in patients with portal hypertension or history of surgical procedures. Areas of prior surgical intervention should be evaluated carefully if able to be reached endoscopically. Portal vascular decompression methods should be considered as a means of ameliorating small bowel variceal bleeding. 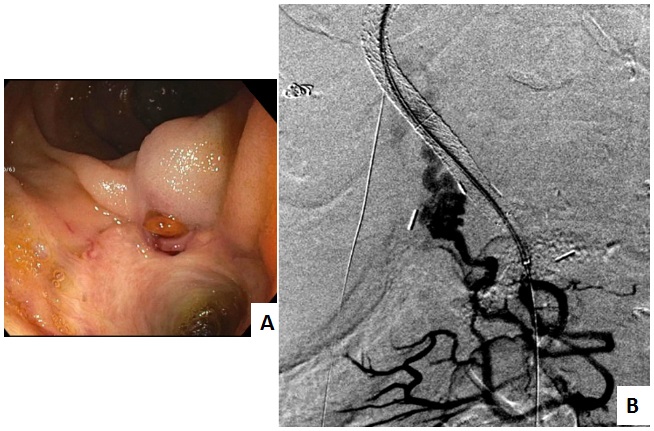