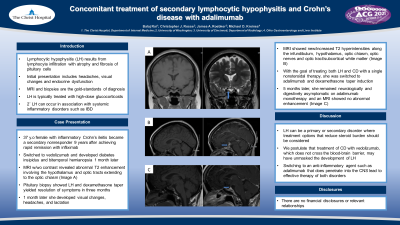 Introduction: Lymphocytic hypophysitis (LH) results from atrophy and fibrosis of pituitary cells secondary to lymphocyte infiltration. Patients initially present with headaches, visual changes and endocrine dysfunction. Magnetic resonance imaging (MRI) and biopsy are the gold-standards of diagnosis. LH is typically treated with high-dose glucocorticoids. Secondary LH can occur in association with systemic inflammatory disorders such as inflammatory bowel disease. We describe an unusual case of LH presenting during treatment revision of Crohn’s disease (CD) and successful treatment of both conditions with the anti-tumor necrosis factor antibody, adalimumab.

Case Description/Methods: A 37-year-old female was diagnosed with inflammatory Crohn’s ileitis and achieved rapid remission with infliximab. Nine years later, she became a secondary nonresponder, having developed active disease with high antibody levels, and was switched to vedolizumab. Within a month, she developed diabetes insipidus and bitemporal hemianopsia with no prior neurological symptoms or headaches. An MRI with and without contrast revealed abnormal T2 enhancement involving the hypothalamus and optic tracts extending to the optic chiasm (Image 1A). A pituitary biopsy was consistent with LH and she was treated with dexamethasone with symptom resolution in three months. She was tapered off steroids, but one month later she developed visual changes, headaches, and lactation. A repeat MRI showed new/increased T2 hyperintensities along the infundibulum, hypothalamus, optic chiasm, optic nerves and optic tract/subcortical white matter (Image 1B). With the goal of treating both LH and CD with a single nonsteroidal therapy, vedolizumab was discontinued and she was started on a adalimumab and dexamethasone taper during induction. Five months later, she remained neurologically and digestively asymptomatic on adalimumab monotherapy and an MRI showed no abnormal enhancement of the chiasmal or hypophyseal region (Image 1C).

Discussion: Lymphocytic hypophysitis can be a primary or secondary disorder. This case highlights the importance of considering treatment options that reduce steroid burden when LH is associated with other systemic disorders. In this case, we postulate that switching treatment of CD with vedolizumab, which does not cross the blood-brain barrier, may have unmasked the development of LH. Switching to an anti-inflammatory agent such as adalimumab that does penetrate into the central nervous system lead to effective therapy of both disorders. 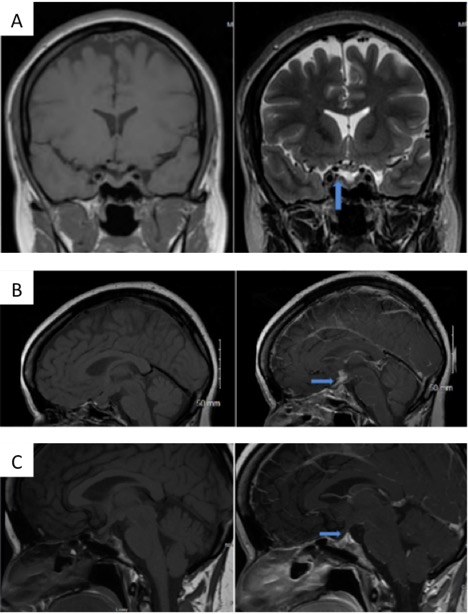