P0712 - Cannabinoid Use and Total Hospital Cost in Patients With Cirrhosis: A Study Based on Nationwide Inpatient 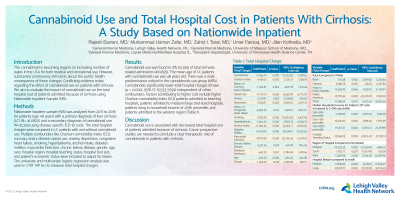 Introduction: The cannabinoid is becoming legal in an increasing number of states in the USA for both medical and recreational use. However, substantial controversy still exists about the public health consequence of these changes. Conflicting evidence exists regarding the effect of cannabinoid use on patients with cirrhosis. We aim to evaluate the impact of cannabinoid use on the total hospital cost of patients admitted because of cirrhosis using Nationwide Inpatient Sample (NIS).

Discussion: Cannabinoid use is associated with decreased total hospital cost of patients admitted because of cirrhosis. Future prospective studies are needed to conclude a clear therapeutic role of cannabinoids in patients with cirrhosis.