P0780 - Diagnosis and Management of a Hepatic Hydatid Cyst 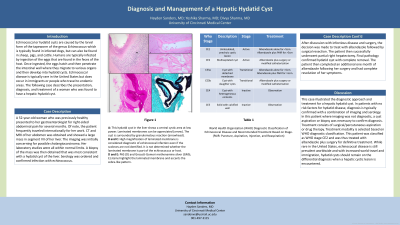 Introduction: Echinococcal or hydatid cysts are caused by the larval form of the tapeworm of the genus Echinococcus which is typically found in infected dogs, but can also be found in sheep, pigs, and cattle. Humans are typically infected by ingestion of the eggs that are found in the feces of the host. Once ingested, the eggs hatch and then penetrate the intestinal wall where they migrate to various organs and then develop into hydatid cysts. Echinococcal disease is typically rare in the the United States, but does occur in immigrants or people who travel to endemic areas. the following case describes the presentation, diagnosis, and treatment of a woman who was found to have a hepatic hydatid cyst.

Case Description/Methods: A 52-year-old-woman who was previously healthy presented to her gastroenterologist for right-sided abdominal fullness present for several months. Of note, the patient frequently traveled internationally for her work. CT and MRI of her abdomen showed a large mass in segment VII of her liver. The imaging was initially concerning for possible cholangiocarcinoma. Her laboratory studies were all within normal limits. A biopsy of the mass was then obtained that was most consistent with a hydatid cyst of the liver. Serology was ordered and confirmed infection with echinococcus. After discussion with infectious disease and surgery, the decision was made to treat with albendazole followed by surgical resection. The patient then successfully underwent partial right hepatectomy. Final pathology confirmed hydatid cyst with complete removal. The patient then completed an additional one month of albendazole following her surgery and had complete resolution of her symptoms.

Discussion: This case illustrated the diagnostic approach and treatment for a hepatic hydatid cyst. In patients with risk factors for hydatid disease, diagnosis is typically confirmed with a combination of imaging and serology. In this patient where imaging was not diagnostic, a cyst aspiration or biopsy was necessary to confirm diagnosis. Treatment consists of surgical/percutaneous aspiration or drug therapy. Treatment modality is selected based on WHO diagnostic classification. This patient was classified as WHO stage CE2 and was thus treated with albendazole plus surgery for definitive treatment. While rare in the United States, echinococcal disease is still prevalent worldwide and with increased world travel and immigration, hydatid cysts should remain on the differential diagnosis when a hepatic cystic lesion is encountered. 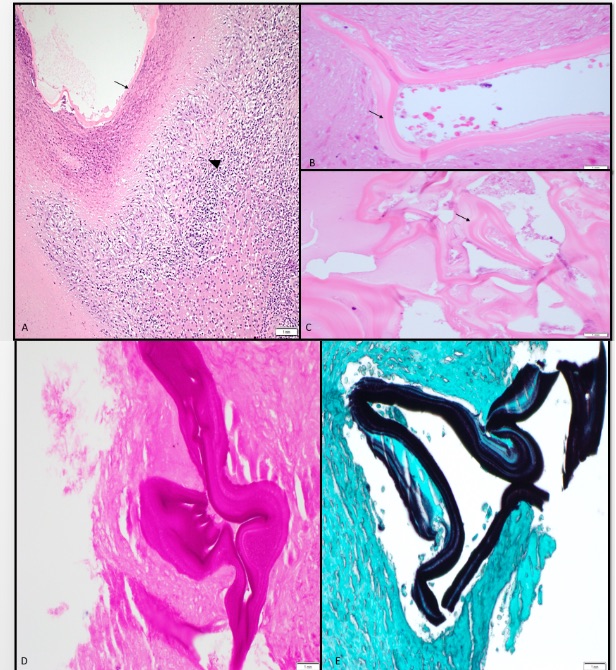