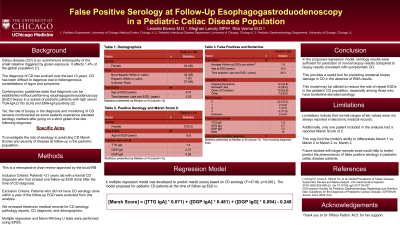 Introduction: Celiac disease (CD) can be difficult to diagnose due to similar symptoms and often relies on positive duodenal biopsy. The role of biopsy in monitoring CD remains controversial as some patients still experience elevated serology after going on a strict gluten-free diet and the phenomenon of false positive serologic tests persists.

Methods: IRB approved retrospective chart review was performed to identify patients < 21 years old with a CD diagnosis who had at least one follow-up EGD done after the time of CD diagnosis. Encounters for patients who did not have CD serology done within a year of the follow-up EGD were excluded. Electronic medical records were reviewed for CD serology, pathology reports, CD diagnosis, and demographics. Multiple regression and Mann-Whitney U tests were performed using SPSS.

A subset of 21 patients had positive serology but biopsies showed no damage to the duodenal mucosa (Marsh Score 0). Within this group, 7 were female. Median age at time of CD diagnosis was 10.9 years. These patients underwent 25 EGDs, with 4 patients each having 2 EGDs that showed no duodenal damage despite elevated CD serology. The median fraction over normal for TTG IgA was 1.4, DGP IgA was 0.37 and DGP IgG was 0.55.

A multiple regression model was developed to predict marsh scores based on CD serology (F=47.48, p< 0.001). The model proposed for pediatric CD patients at the time of follow-up EGD is:

Discussion: In the proposed regression model, serology results were sufficient for prediction of normal biopsy results in patients with borderline elevated serology in the absence of EMA results. This model may be used to reduce the role of repeat EGDs in the pediatric CD population. The model may also be applicable to patients with other GI or autoimmune conditions, but further analysis is needed due to limited variety of conditions represented in this study. Limitations include that normal ranges of lab values were not always reported in electronic medical records, and the model’s ability to differentiate Marsh 1 vs. Marsh 2 vs. Marsh 3. Future studies with larger sample sizes could better predict the phenomenon of false positive serology in pediatric CD patients.