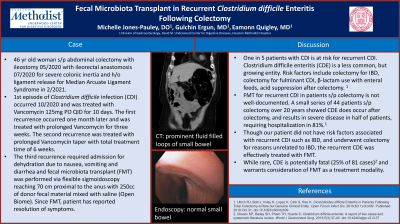 Introduction: Fecal microbiota transplant (FMT) is well-known as treatment for recurrent Clostridium difficile infection (CDI). It is curative in 80% of severe or fulminant CDI cases. In this case, we explore the utility of FMT in a patient with recurrent C. diff enteritis (CDE) after colectomy with ileorectal anastomosis.

Discussion: FMT for recurrent CDI in patients s/p colectomy is not well-documented. A small series of patients s/p colectomy over 20 years showed recurrent CDE does occur after colectomy, and results in severe disease in half of patients, requiring hospitalization in 81%. Risk factors for CDE were colectomy for IBD, colectomy for fulminant CDI, β-lactam use with enteral feeds, and acid suppression after colectomy. Cases of fulminant CDE with multiorgan failure and death have been reported (diagnosed post-mortem). A young man with UC s/p colectomy with IPAA with recurrent CDE was effectively treated with FMT. While rare, recurrent CDE is potentially fatal and warrants consideration of FMT as a treatment modality. Though our patient did not have IBD, was not immunosuppressed and underwent colectomy for reasons unrelated to IBD, the recurrent CDE was effectively treated with FMT.