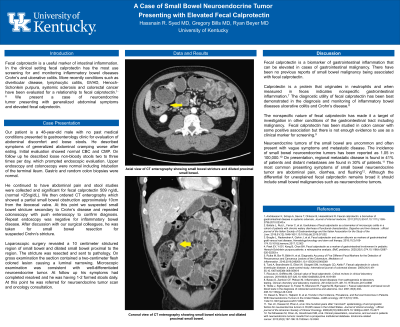 Introduction: Fecal calprotectin (FC) is a marker of intestinal inflammation most useful in the management of inflammatory bowel diseases (IBD). It is mostly found in the cytoplasm of granulocytes, and to a lesser extent, monocytes. Conditions such as diverticular disease, Microscopic colitis, and Graft versus Host Disease have been associated with elevated FC levels. Historically, this calcium and zinc binding protein has been used to distinguish between IBD and functional bowel disease. We find that any mechanism causing gut mucosal injury can lead to increased migration of neutrophils into the gut lumen, with eventual release of calprotectin by these leukocytes. Gastrointestinal malignancy, particularly colorectal cancer, is one such entity that has been studied to show elevated FC. On the other hand, no cases of neuroendocrine tumors (NET) of the gastrointestinal tract with elevated FC have been reported.

Case Description/Methods: Our patient is a healthy 48-year old male who presented to gastroenterology clinic for evaluation of abdominal cramping and loose stools. Initial EGD and colonoscopy with biopsies were normal. His symptoms persisted and stool studies resulted an elevated FC of 595 μg/g (normal 0-120 μg/g). CT enterography showed a small bowel stricture near the ileocecal valve (Figure 1). Suspecting Crohn’s disease, we performed a push enteroscopy and repeat colonoscopy with biopsy-once again which were negative. Subsequent laparoscopic resection of small bowel, 12.5 x 5.0cm in diameter, was performed. A 1.0 x 1.0 x 0.4cm well-circumscribed tan mass was identified within the aforementioned small bowel stricture. Pathology sent was consistent with well-differentiated neuroendocrine tumor. Patient had resolution of symptoms and follows with oncology for surveillance.

Discussion: FC is a biomarker of gastrointestinal inflammation that can be elevated in multiple conditions. The most studied medical pathologies linked with elevated FC include IBD, infectious gastroenteritis/colitis, microscopic colitis, and diverticular disease. Perhaps due to the wide use of other neuroendocrine biomarkers such as Chromogranin A and 5-hydroxyindoleacetic acid, coupled with the infrequency of small bowel NETs, FC level correlation has not been investigated. Neuroendocrine tumors of the small bowel are uncommon and often present with vague symptoms and metastatic disease. The differential diagnosis for unexplained elevated FC remains broad and it should include small bowel malignancies such as neuroendocrine tumors. 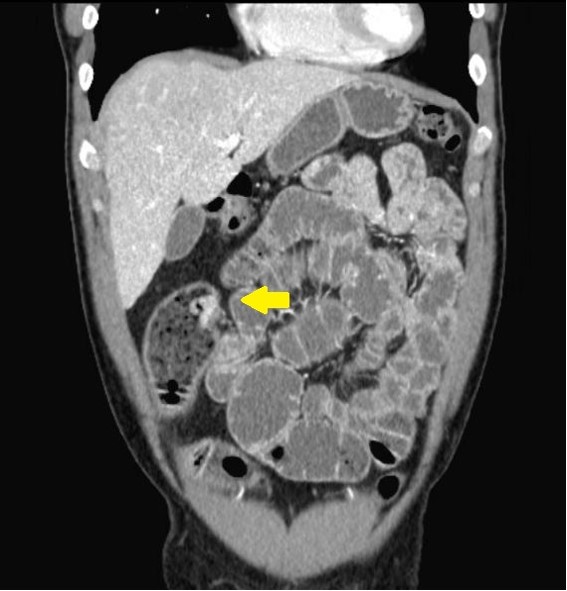