P0959 - A Cereus-ly Rare Cause of Chronic Diarrhea 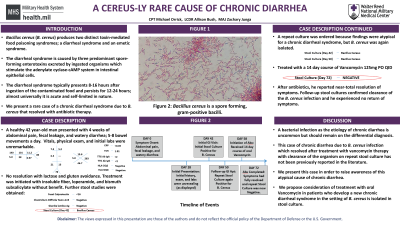 Introduction: Bacillus cereus (B. cereus) is a spore forming, gram-positive bacilli that produces two distinct toxin-mediated food poisoning syndromes; a diarrheal syndrome and an emetic syndrome. The diarrheal syndrome is caused by three predominant spore-forming enterotoxins excreted by ingested organisms which stimulate the adenylate cyclase-cAMP system in intestinal epithelial cells. Watery diarrhea and abdominal pain typically present 8-16 hours after ingestion of the contaminated food and persist for 12-24 hours. The diarrheal syndrome is usually acute and self-limited. We present a rare case of a chronic diarrheal syndrome due to B. cereus that resolved with antibiotic therapy.

Case Description/Methods: A healthy 42 year-old man presented with 4 weeks of abdominal pain, fecal leakage, and watery diarrhea with 5-8 bowel movements a day. Vitals and abdominal exam were unremarkable. Lab work-up revealed a normal complete blood count, blood chemistries, thyrotropin, CRP and celiac serologies. Symptoms did not resolve with lactose and gluten avoidance. Treatment was initiated with insoluble fiber, loperamide and bismuth subsalicylate. Symptoms persisted and additional studies were ordered. Fecal calprotectin was normal, C. difficile PCR was negative, and giardia antigen was negative. Stool culture was positive for B. cereus. A repeat culture was ordered because the stool findings were atypical for a chronic diarrheal syndrome. Eight weeks from initial symptom onset, B. cereus was again isolated in culture. The patient was treated with a 14 day course of oral vancomycin, 125mg four times daily. Soon after starting antibiotics, he reported near-total resolution of symptoms. Follow-up stool cultures confirmed clearance of the B. cereus infection and he experienced no return of symptoms.

Discussion: B. cereus is a common cause of food-borne gastroenteritis, however, it almost universally resolves within 24 hours without intervention. A bacterial infection as the etiology of chronic diarrhea is uncommon but should remain on the differential diagnosis. A review of the literature shows that B. cereus has been reported to cause multiple days of diarrheal symptoms. However, chronic diarrhea due to B. cereus infection resolving after treatment with vancomycin therapy and clearance of the organism has not been previously reported. We present this case in order to raise awareness of this atypical presentation and propose consideration of testing and treatment in patients who develop a new chronic diarrheal syndrome.