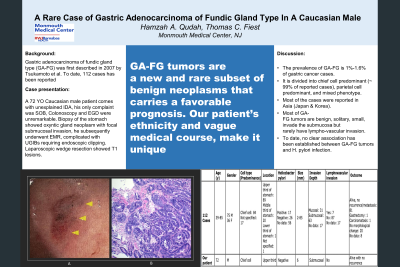 Introduction: Gastric adenocarcinoma of fundic gland type (GA-FG) was first described in 2007 by Tsukamoto et al. To date, 112 cases of GA-FG have been reported in the literature. They are considered benign tumors. We present a patient with history of obscure GI bleeding who was diagnosed with GA-FG.

Case Description/Methods: A 72 years old white American male was referred to the GI clinic for unexplained IDA. He complained of SOB and LL edema of 1 week. He denied: abdominal pain, hematemesis, hematochezia, melena, or NSAID intake. He had negative colonoscopy, EGD and VCE in 2016. PMH: CHFpEF, Afib, HTN, CKD-3. PSH: AVR on warfarin since 2013. Exam was unremarkable. Labs: Hg 8.8 g/dl with a baseline of 11 g/dl, BUN 22 mg/dl, Cr 1.4 mg/dl at baseline, Iron 16 ug/dl, ferritin 49 ng/ml, rest of labs were normal. EGD showed: duodenal erosions without bleeding, chronic gastritis, and nodular mucosa of the greater curvature of the stomach. Colonoscopy was unremarkable. Biopsy of the stomach showed oxyntic gland neoplasm with focal submucosal invasion. The patient underwent endoscopic mucosal resection (EMR) of the tumor complicated with bleeding that required 3 endoscopies with clips to control it in the setting of anticoagulation with warfarin intake. He then had an elective laparoscopic wedge resections and was found to have T1 lesions.

Discussion: The prevalence of GA-FG is 1%-1.6% of gastric cancer cases. It is divided into chief cell predominant (~ 99% of reported cases), parietal cell predominant, and mixed phenotype. Most of the cases were reported in Asia (Japan & Korea). Most of GA-FG tumors are benign, solitary, small, invade the submucosa but rarely have lymphovascular invasion. To date, no clear association has been established between GA-FG tumors and H. pylori infection. The histopathological appearance of GA-FG is usually of a well differentiated neoplasm, resembling that of fundic glands. Immunohistochemical markers and stains aids in the diagnosis. Our patient’s pathology results showed moderately differentiated adenocarcinoma with focal submucosal invasion (T1b, GA-FG, MUC6+, Ki-67 proliferation index 25%) as seen in Figure 1. Treatment is usually surgical excision or EMR with excellent overall prognosis. Summary of GA-FG tumors characteristics are summarized in the table below. In summary, GA-FG tumors are a new and rare subset of benign neoplasms that carries a favorable prognosis. Our patient’s ethnicity and vague course make it unique and is a great addition to the literature. 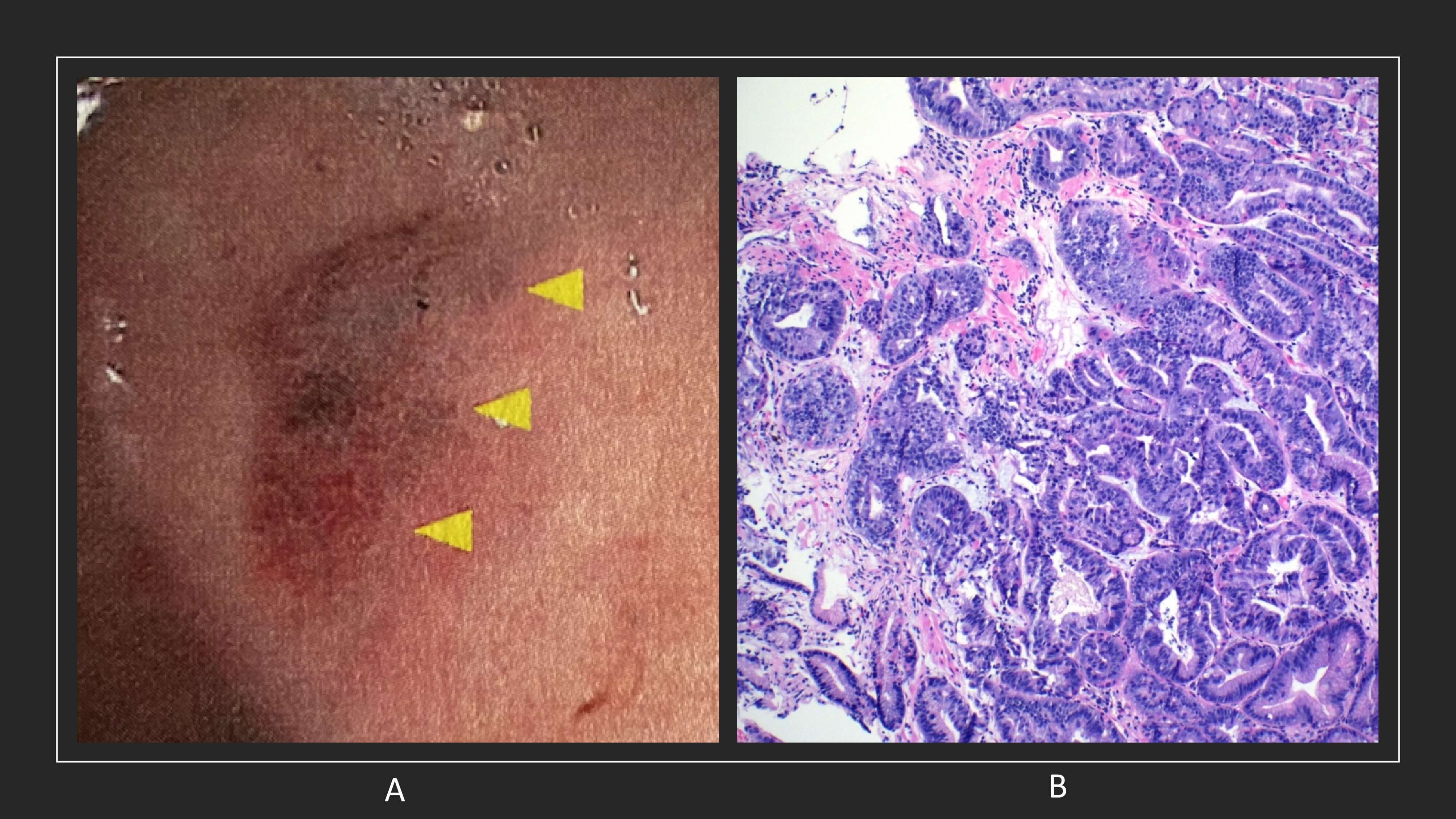 Figure: Figure 1
A: Nodular mucosa in the greater curvature of the stomach
B: Intermediate power of hematoxylin and eosin stain showing oxyntic gland neoplasm with submucosal invasion