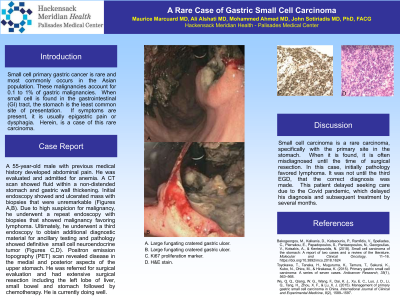 Introduction: Small cell primary gastric cancer is rare and most commonly occurs in the Asian population. These malignancies account for 0.1 to 1% of gastric malignancies. When small cell is found in the gastrointestinal (GI) tract, the stomach is the least common site of presentation. If symptoms are present, it is usually epigastric pain or dysphagia. Herein, is a case of this rare carcinoma.

Case Description/Methods: The patient is a 55-year-old male with no reported medical history who developed abdominal pain early in 2020 but did not seek treatment due to the ongoing Covid pandemic. He continued to have symptoms and eventually went to an outside hospital where he was admitted for his newly diagnosed anemia. A computed topography (CT) scan showed fluid within a non-distended stomach and gastric wall thickening. He underwent an initial EGD which showed an ulcerated mass (Figure 1A, 1C); biopsies were unremarkable. Due to high suspicion for malignancy, he underwent a repeat EGD with biopsies that showed malignancy favoring lymphoma. Positron emission topography (PET) scan revealed disease in the medial and posterior aspects of the upper stomach. Ultimately, he underwent a third EGD to obtain additional diagnostic material for ancillary testing. Pathology showed small cell neuroendocrine tumor (Figures 1B and 1D). He was referred for surgical evaluation and had extensive surgical resection including the left lobe of liver, small bowel and stomach followed by chemotherapy. He is currently doing well.

Discussion: Small cell carcinoma is a rare carcinoma, specifically with the primary site in the stomach. When it is found, it is often misdiagnosed until the time of surgical resection. In this case, initially pathology favored lymphoma. It was not until the third EGD, that the correct diagnosis was made. This patient delayed seeking care due to the Covid pandemic, which delayed his diagnosis and subsequent treatment by several months. 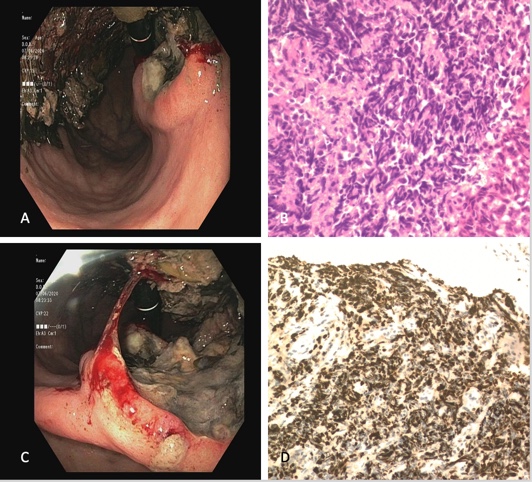