P1015 - “Rapunzel, Rapunzel, Where Is Your Long, Beautiful Hair?”: A Case Report of Rapunzel Syndrome 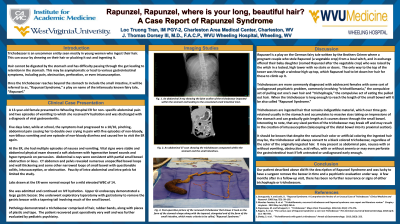 Introduction: Trichobezoars are uncommonly seen in young women who ingest their pulled-out hair. Hair undigestible by the stomach, leads to gastric retention which may be asymptomatic or lead to various gastrointestinal symptoms, including pain, obstruction, perforation, or even intussusception. Once a trichobezoar reaches beyond the stomach to include the small intestine, it is referred to as, “Rapunzel Syndrome,” a play on the fairy tale, Rapunzel.

Case Description/Methods: A 13-year-old female presented with non-specific abdominal pain and two episodes of vomiting to which she had IVF hydration with discharge diagnosis of viral gastroenteritis. Five days later at school, symptoms progressed to a 10/10, pinching, abdominal pain with five episodes of non-bloody, non-bilious vomiting and an episode of non-bloody diarrhea, causing her return to the ED. She was vitally stable and abdominal exam had hyperactive bowel sounds, soft to palpation yet hyper-tympanic to percussion. ABX showed partial small bowel obstruction or ileus. CT abdomen revealed unopacified thickened bowel loops with narrowed loops of small bowel questionable for colitis, intussusception, or obstruction. ER labs was evident of mild leukocytosis of 14 where she continued on IVF hydration on admission. EGD demonstrated a large gastric bezoar and ex-lap with gastrotomy, removed the gastric bezoar with a tapering tail leading into the small bowel. Pathology demonstrated a trichobezoar comprised of hair, rubber bands, along with pieces of plastic and tape. Post operatively she recovered well and was evaluated by psychiatry.

Discussion: Trichobezoars are uncommonly diagnosed in young females with undiagnosed “trichotillomania,” the compulsive act of pulling out one’s own hair along with “trichophagia,” the compulsive act of eating the pulled-out hair. A trichobezoar that reaches the small bowel is referenced as “Rapunzel Syndrome.” Hair being indigestible, gets retained and taking the impression of the stomach and courses down the small bowel. Any sized portion may break off causing intussusception. Despite the natural hair color or artificial hair coloring, trichobezoars will always convert to black. Patients present with abdominal pain, nausea, obstruction, acid reflux, with or without anemia and may even perforate the GI tract if left untreated or undiagnosed early enough. Our patient had Rapunzel Syndrome and a surgeon was able to remove the bezoar with a psychiatric eval under way, which she had a great recovery without recurrence on follow up.

Figure: Fig 1A: An abdominal X-ray showing the faint outline of the trichobezoar impacted within the stomach and leading to the convoluted small intestinal tract.

Fig 1B: An abdominal CT scan showing the trichobezoar compacted within the stomach and the small intestines.