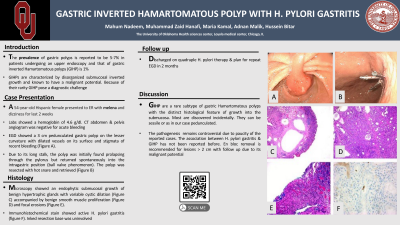 Introduction: The prevalence of gastric polyps is reported to be 5-7% and of these only 1% are diagnosed to be gastricinverted hamartomatous polyps (GIHP). GIHPs are characterized by disorganized submucosal inverted growth, are known to have a malignant potential and because of their rarity pose a histological and clinical challenge. We present a case of GIHP with underlying H. pylori gastritis manifesting as symptomatic anemia and melena.

Case Description/Methods: A post-menopausal 54-year-old Hispanic female presented to ER with melena and dizziness. On exam, she was tachycardic and borderline hypotensive. Admission labs were significant for a hemoglobin of 4.6 g/dl. CT abdomen and pelvis angiogram was negative. EGD after initial stabilization showed a 3 cm pedunculated gastric polyp on the lesser curvature with dilated vessels on its surface and stigmata of recent bleeding (Figure A) with otherwise normal esophagus, examined stomach and duodenum. Due to its long stalk, the polyp was initially found prolapsing through the pylorus but returned spontaneously into the intragastric position (ball valve phenomenon). The polyp base was sequentially injected with epinephrine, endoclips prophylactically applied and then polyp resected with hot snare and retrieved (Figure B). Microscopy showed an endophytic submucosal growth of benign hypertrophic glands with variable cystic dilation (Figure C) accompanied by benign smooth muscle proliferation (Figure D) and focal erosions (Figure E). Active H. pylori gastritis was seen (Figure D) and confirmed by immunohistochemical stain (Figure F). Inked resection base was uninvolved with overhanging lateral nonhamartomatous gastric mucosa. She was discharged on quadruple H. pylori therapy and plan for repeat EGD in 2 months.

Discussion: GIHP are known to be associated with up to 20% malignancy risk. Most of the earlier reported cases were seen in Asian population and did not present with features of symptomatic anemia or overt GI bleed. It is a histologically distinct case because contrary to the exophytic configuration of hamartomatous polyps, our patient had an endophytic nature and thus called a GIHP. The pathogenesis of GIHP remains controversial because of the paucity of reported cases. The association between H. pylori gastritis and GIHP has not been reported before. En bloc removal is recommended for lesions more than 2 cm with follow up due to its malignant potential. In conclusion, we suggest to test for H.pylori in each case to see if an association exists. 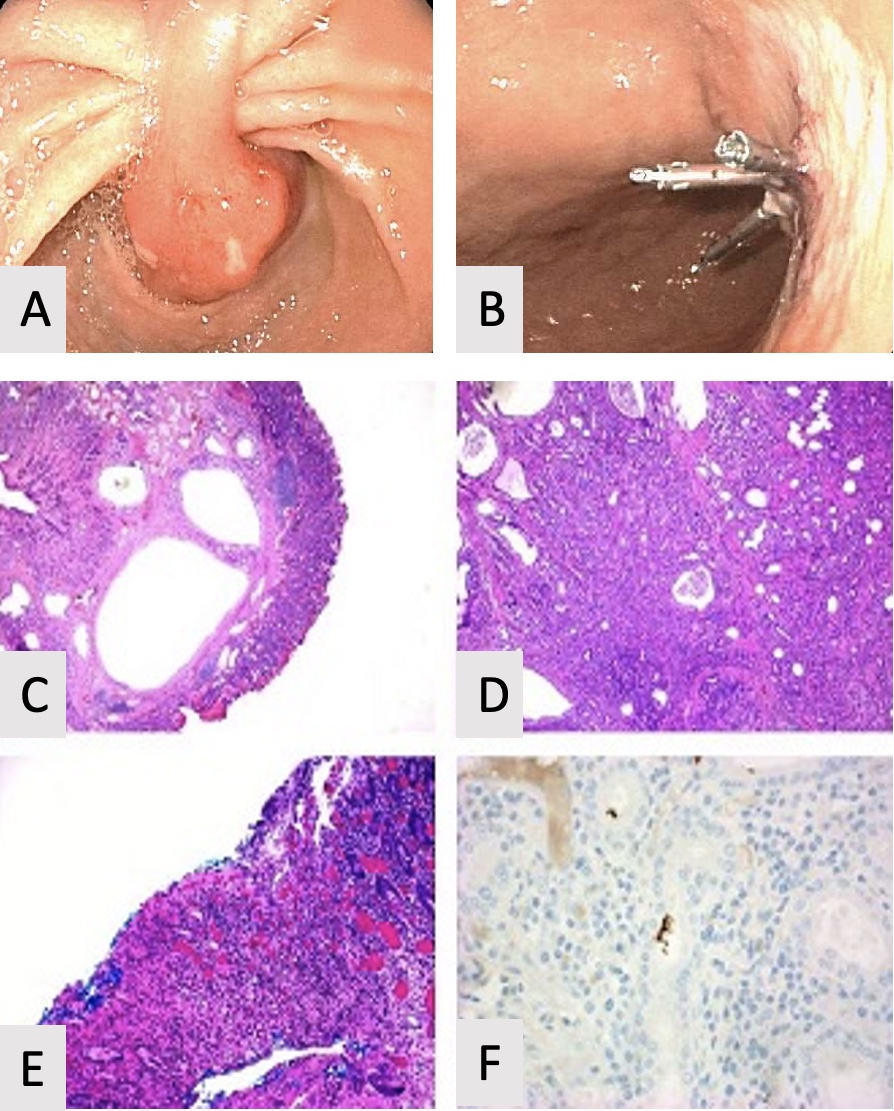