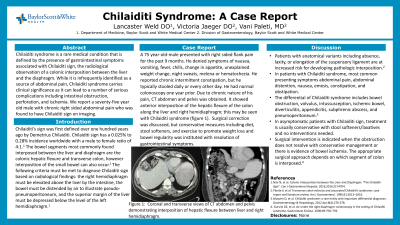 Introduction: Chilaiditi’s sign was first defined over one hundred years ago by Demetrius Chilaiditi. Chilaiditi sign has a 0.025% to 0.28% incidence worldwide with a male to female ratio of 4:1. The bowel segments most commonly found interposed between the liver and diaphragm are the colonic hepatic flexure and transverse colon, however interposition of the small bowel can also occur. The following criteria must be met to diagnose Chilaiditi sign based on radiological findings: the right hemidiaphragm must be elevated above the liver by the intestine, the bowel must be distended by air to illustrate pseudo-pneumoperitoneum, and the superior margin of the liver must be depressed below the level of the left hemidiaphragm.

Case Description/Methods: A 75 year-old-male presented with right sided flank pain for the past 9 months. He denied symptoms of nausea, vomiting, fever, chills, change in appetite, unexplained weight change, night sweats, melena or hematochezia. He reported chronic intermittent constipation, but he typically stooled daily or every other day. He had normal colonoscopy one year prior. Due to chronic nature of his pain, CT abdomen and pelvis was obtained. It showed anterior interposition of the hepatic flexure of the colon along the liver and right hemidiaphragm; this may be seen with Chilaiditi syndrome (figure 1). Surgical correction was discussed, but conservative measures including diet, stool softeners, and exercise to promote weight loss and bowel regularity was instituted with resolution of gastrointestinal symptoms.