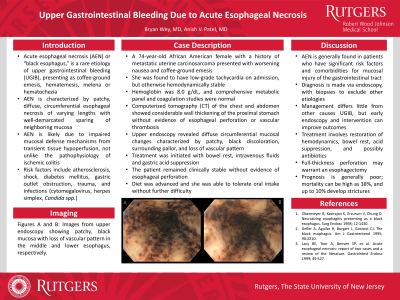 Case Description/Methods: A 74-year-old African American female with a past medical history of metastatic uterine carcinosarcoma previously on cisplatin/paclitaxel presented with rapidly worsening nausea and coffee-ground emesis. On admission, she had low-grade tachycardia, but otherwise vital signs were within normal limits; her hemoglobin then was 8.0 g/dL. She underwent upper endoscopy, which revealed diffuse circumferential mucosal changes characterized by patchy, black discoloration, surrounding pallor, and loss of vascular pattern (Figures A and B), consistent with AEN. Computerized tomography (CT) imaging of the chest and abdomen did not reveal evidence of esophageal perforation or vascular thrombosis. She was managed with bowel rest, intravenous fluids and gastric acid suppression. She remained clinically stable with no evidence of esophageal perforation for the remainder of her hospitalization. She was able to gradually advance and tolerate an oral diet without difficulty.

Discussion: We present here a case of acute upper gastrointestinal bleeding (UGIB) due to AEN, which is mostly found in patients who have significant comorbidities and risk factors for gastrointestinal mucosal injury. Diagnosis is made on endoscopic visualization. While management differs little from other causes UGIB, early endoscopy and intervention can improve mortality and outcomes in these cases. Treatment involves urgent restoration of hemodynamics, acid suppression, antibiotics and bowel rest. In cases of full-thickness perforation, esophagectomy is performed. Prognosis is generally poor; mortality can be high as 38%, and 10% of patients who survive develop strictures. Even so, favorable outcomes can be achieved with close monitoring and early appropriate treatment.