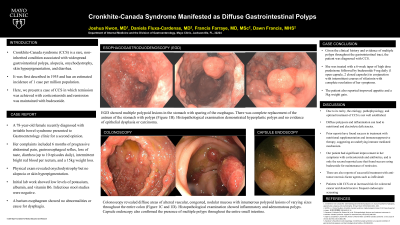 Introduction: Cronkhite-Canada syndrome (CCS) is a rare, non-inherited condition associated with widespread gastrointestinal polyps, alopecia, onychodystrophy, skin hyperpigmentation, and diarrhea. It was first described in 1955 and has an estimated incidence of 1 case per million population. Here, we present a case of CCS manifested as widespread polyps throughout the gastrointestinal tract.

Discussion: Due to its rarity, the etiology, pathophysiology, and optimal treatment of CCS is not well established. Diffuse polyposis and inflammation can lead to nutritional and electrolyte deficiencies as was seen in our patient’s case. Prior reports have found success in treatment with nutritional supplementation and immunosuppressive therapy, suggesting an underlying immune-mediated mechanism. Our patient had significant improvement in her symptoms with prednisone, budesonide and antibiotics.

Figure: Figure 1. Esophagogastroduodenoscopy and colonoscopy images. Figure 1A shows multiple 2-30 mm pedunculated and sessile polyps with no bleeding and no stigmata of recent bleeding in the cardia and gastric body. Figure 1B shows multiple pseudopolyps in the sigmoid colon.