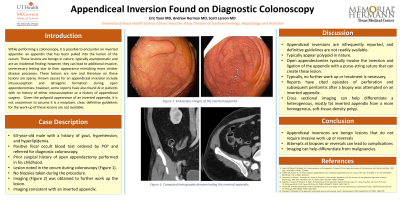 Introduction: While performing a colonoscopy, it is possible to encounter an appendiceal inversion (AI): an appendix that has been pulled into the lumen of the cecum. These lesions are benign in nature, typically asymptomatic and are an incidental finding; however, they can lead to additional invasive testing due to their appearance mimicking more sinister disease processes. The most common etiology is iatrogenic formation during open appendectomies. Cases of perforation of the colon and peritonitis after the biopsy or attempted removal of an AI have been reported in the literature; however, the risk of this complication has not been well studied; furthermore, clear, definitive guidelines for the work-up of these lesions are not available.

Case Description/Methods: A 63-year-old male was found to have a positive fecal occult blood test ordered by his primary care physician and was referred to our department for an average risk colon cancer screening. Patient has a history of prior open appendectomy performed in his childhood. Patient denied any nausea, vomiting, diarrhea, hematochezia, or melena. During the procedure, a lesion was noted in the cecum; it was determined to be an inverted appendix based on the location and a positive pillow sign. Computed topography of the abdomen and pelvis was ordered to rule out potential malignancy associated with the inverted appendix. A tubular appearing structure was visualized in the cecum with no inflammatory changes suggestive of an inverted appendix.

Discussion: Appendiceal inversions are infrequently reported in the literature, and definitive guidelines on the work-up of a suspected appendiceal inversion are not available. Given the reports of peritonitis and possible perforation after attempted polypectomy reported in some of these cases, it is imperative to consider an appendiceal inversion when encountering a polypoid lesion near the region of the appendix during colonoscopy. Conversely, an inverted appendix must be differentiated from a pathologic process that requires further work up. The appearance of the lesion and a history of an open appendectomy in the past could provide a clue in the diagnosis of an appendiceal inversion. In some reported cases, imaging of the abdomen was used to characterize the lesion and rule out an malignancy. Given the risks associated with attempted removal or reversion and the benign nature of the inversion, it is advised to forgo further intervention.