P1536 - Acute Gastrointestinal Bleeding Due to a Duodenal Hamartomatous Polyp: A Case Report 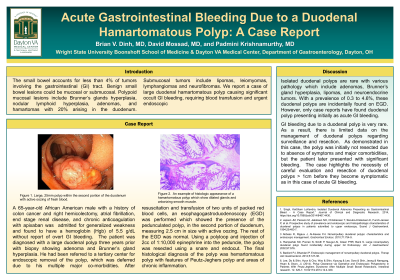 Case Description/Methods: A 65-year-old African American male with a history of colon cancer and right hemicolectomy, atrial fibrillation, end stage renal disease, and chronic anticoagulation with apixaban was admitted for generalized weakness and found to have a hemoglobin (Hgb) of 5.5 g/dL without report of overt GI bleeding. The patient was diagnosed with a large duodenal polyp three years prior with biopsy showing adenoma and Brunner’s gland hyperplasia. He had been referred to a tertiary center for endoscopic removal of the polyp, which was deferred due to his multiple major co-morbidities. After resuscitation and transfusion of two units of packed red blood cells, an esophagogastroduodenoscopy (EGD) was performed which showed the presence of the pedunculated polyp in the second portion of duodenum, measuring 2.5 cm in size with active oozing. The rest of the EGD was normal. Using a polyloop and injection of 2cc of 1:10,000 epinephrine into the peduncle, the polyp was resected using a snare and endocut. The final histological diagnosis of the polyp was hamartomatous polyp with features of Peutz-Jeghers polyp and areas of chronic inflammation. After resection of the duodenal polyp, the patient's Hgb returned to normal limits at follow up.

Discussion: GI bleeding due to a duodenal polyp is very rare. As a result, there is limited data on the management of duodenal polyps regarding surveillance and resection. As demonstrated in this case, the polyp was initially not resected due to absence of symptoms and major comorbidities, but the patient later presented with significant bleeding requiring urgent endoscopic intervention. The case highlights the necessity of careful evaluation and resection of duodenal polyps > 1cm before they become symptomatic as in this case of acute GI bleeding. 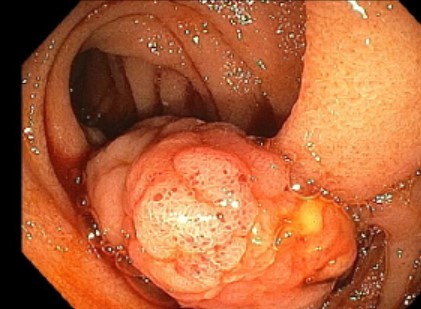 Figure: Acute gastrointestinal bleeding due to a 2.5 cm pedunculated polyp, pathology consistent with hamartoma, within the second portion of the duodenum with active oozing of blood.