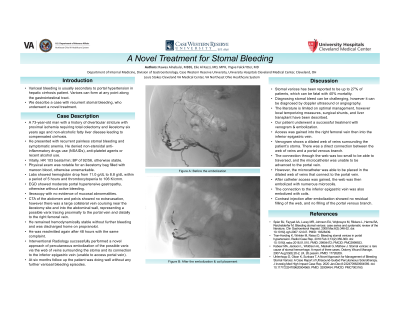 Introduction: Variceal bleeding is usually secondary to portal hypertension in hepatic cirrhosis patient. Varices can form at any point along the gastrointestinal tract. We describe a case with recurrent stomal bleeding, who underwent a novel treatment.

Case Description/Methods: A 73-year-old man with a history relevant for diverticular stricture with proximal ischemia requiring total colectomy and ileostomy six years ago and non-alcoholic fatty liver disease leading to compensated cirrhosis who presented to the emergency department with recurrent painless stomal bleeding. Bleeding was associated with symptomatic anemia and hemodynamic instability leading to an admission to the intensive care unit. He denied non-steroidal anti-inflammatory drugs use (NSAIDs), anti-platelet agents or recent alcohol use. Physical exam was notable for an ileostomy bag filled with maroon blood, otherwise unremarkable. Labs showed hemoglobin drop from 11.0 g/dL to 8.8 g/dL within a period of 5 hours and thrombocytopenia to 106 K/cmm that was thought to be secondary to liver cirrhosis. Esophagogastroduodenoscopy showed moderate portal hypertensive gastropathy, otherwise without active bleeding. Subsequent ileoscopy was normal, with no evidence of mucosal abnormalities. Computed tomography angiography of the abdomen and pelvis was performed with no extravasation noted, however there was a large collateral vein coursing near the ileostomy site and into the abdominal wall, representing a possible varix tracing proximally to the portal vein and distally to the right femoral vein, which was thought to be the source of bleeding. Patient remained hemodynamically stable without further bleeding. He was discharged home on propranolol. Unfortunately, the patient was readmitted again after 48 hours with the same complaint, not requiring intensive care. Interventional Radiology successfully performed a novel approach of percutaneous embolization of the varix via the web of veins surrounding the stoma and its connection to the inferior epigastric vein (unable to access portal vein). At six months follow up the patient was doing well without any further variceal bleeding episodes.

Discussion: Stomal varices has been reported to be up to 27% of patients, which can be fatal with 40% mortality. Diagnosing stomal bleed can be challenging. The literature is limited on optimal management, however local temporizing measures and surgical interventions have been described. Our patient underwent successful treatment with venogram and embolization.