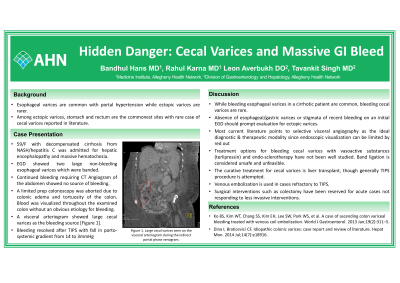 Introduction: Portal hypertension commonly results in esophageal varices while rarely causing ectopic varices. Among ectopic varices, the stomach and rectum are the most common sites with rare case of cecal varices reported in literature. This case serves to demonstrate the diagnostic and therapeutic challenge of bleeding cecal varices.

Case Description/Methods: 59 year female with decompensated hepatic cirrhosis from NASH/hepatitis C was admitted for hepatic encephalopathy and massive hematochezia. EGD showed two large non-bleeding esophageal varices which were banded. Subsequent emergent CT Angiogram of the abdomen and pelvis done due to ongoing bleeding showed no source of bleeding. A limited prep colonoscopy had to be aborted due to colonic edema and tortuosity of the colon. Blood was visualized throughout the examined colon without an obvious etiology for bleeding. A visceral arteriogram showed large cecal varices thought to be the bleeding source [Figure 1]. TIPS procedure resulted in reduction in porto-systemic pressure gradient from 14 mmHg to 3 mmHg with resolution of bleeding.

Discussion: While bleeding esophageal varices in a cirrhotic patient are common, bleeding cecal varices are rare. Paucity of data makes diagnosing cecal varices difficult. Absence of esophageal/gastric varices or stigmata of recent bleeding on an initial EGD in those with portal hypertension should prompt evaluation for ectopic varices. Endoscopic visualization is limited during acute hemorrhage due to red out and potential collapse of variceal vessels from over insufflation or hypotension. Thus, most current literature points to selective visceral angiography as the ideal diagnostic modality for diagnosis and therapeutic interventions. When feasible, CT angiogram along with meticulous endoscopic evaluation (in adjunct with endoscopic ultrasound) can also be used.

Treatment options for bleeding cecal varices such as vasoactive substance administration and endoscopic therapy, i.e. injection sclerotherapy, have not been well studied. Band ligation is considered unsafe and unfeasible for varices proximal to the rectum. The curative treatment for cecal varices is liver transplant, though generally TIPS procedure is attempted, and case reports have demonstrated the use of venous embolization in cases refractory to TIPS. Surgical interventions such as colectomy have also traditionally been a part of curative treatment that has been reserved for acute cases not responding to less invasive interventions. 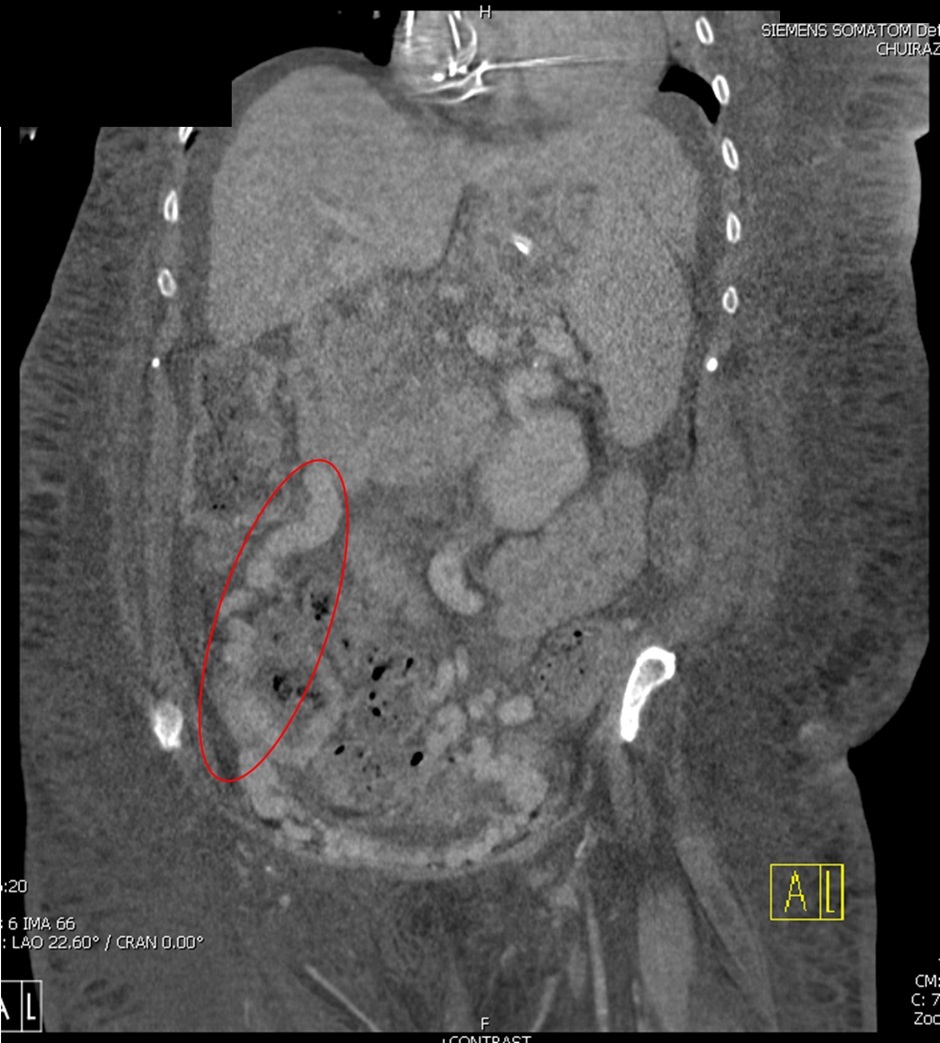