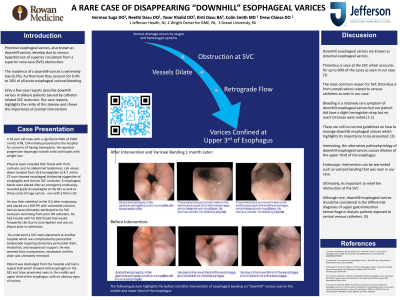 Introduction: Proximal esophageal varices, also known as downhill varices, develop due to venous hypertension of superior circulation from a superior vena cava (SVC) obstruction.The incidence of a downhill varices is extremely low (0.5%). Furthermore they account for 0.4% to 10% of all acute esophageal variceal bleeding. Only a few case reports describe downhill varices in dialysis patients caused by catheter-related SVC occlusion. Our case reports, highlights the rarity of this disease and shows the importance of prompt intervention.

Case Description/Methods: A 59 year old male with a significant PMH of ESRD on HD, HTN, CVA initially presented to the hospital for concerns of having hemoptysis. He reported progressive dysphagia to both solid and liquids with weight loss. Physical exam revealed RUE fistula with thrill, cachexia, and no abdominal tenderness. Lab values down trended from 10.6 hemoglobin to 8.7. initial CT scan showed esophageal thickening suggestive of esophagitis and chronic SVC occlusion. 6 esophageal bands were placed after an emergency endoscopy revealed grade B esophagitis at the GEJ as well as three cords of large varices - one with a fibrin clot. He was then admitted to the ICU after endoscopy, and placed on a BID PPI with octreotide infusion. Varices were ultimately attributed to his SVC occlusion stemming from prior HD catheters. He had trouble with his RUE fistula that would frequently clot due to auto-ligation and was on eliquis prior to admission. He underwent a SVC stent placement at another hospital which was complicated by pericardial tamponade requiring temporary pericardial drain, intubation, and vasopressor support. He was weaned from vasopressors, extubated, and the drain was ultimately removed. Patient was discharged from the hospital and had a repeat EGD which showed mild esophagitis in the GEJ and trace prominent veins in the middle and upper third of the esophagus, with no obvious signs of varices.

Discussion: Downhill esophageal varices are extremely rare but should be considered in the differential for patients who present with upper gastrointestinal hemorrhage in ESRD patients with multiple central venous catheters. Treatment requires timely coordination with specialists in endovascular and gastrointestinal endoscopy and can be life saving as displayed in our case. 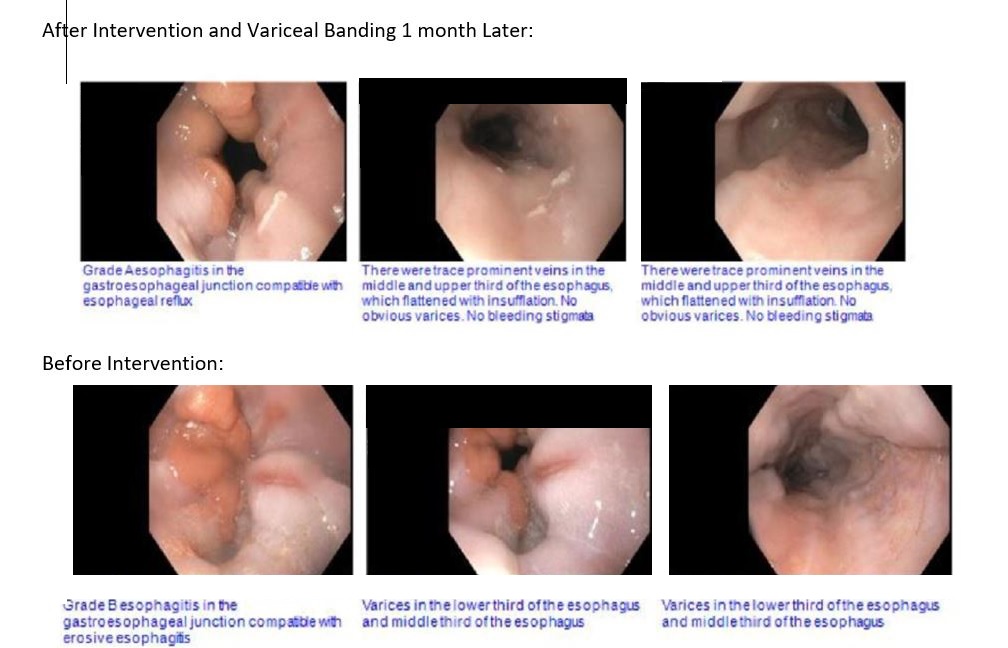 Figure: The following picture highlights the before and after intervention of esophageal banding on "downhill" varices seen in the middle and lower third of the esophagus