P1556 - Finding a Needle Outside a Haystack: Duodenal Perforation by IVC Filter 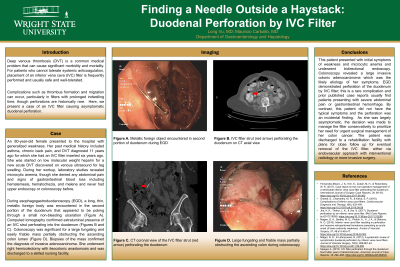 Introduction: Deep venous thrombosis (DVT) is a common medical problem that can cause significant morbidity and mortality. For patients who cannot tolerate systemic anticoagulation, placement of an inferior vena cava (IVC) filter is frequently performed and usually well-tolerated. Complications can occur, particularly in filters with prolonged indwelling time, though perforations are historically rare. Here, we present a case of an IVC filter causing asymptomatic duodenal perforation.

Case Description/Methods: An 80-year-old female presented to the hospital with generalized weakness. Her past medical history included asthma, chronic back pain, and DVT diagnosed 11 years ago for which she had an IVC filter inserted 6 years ago. She was started on low molecular weight heparin for a deep venous thrombosis discovered on venous ultrasound for leg swelling. During her workup, laboratory studies revealed microcytic anemia, though she denied any abdominal pain and signs of gastrointestinal blood loss including hematemesis, hematochezia, and melena and never had upper endoscopy or colonoscopy before. During esophagogastroduodenoscopy (EGD), a long, thin, metallic foreign body was encountered in the second portion of the duodenum that appeared to be poking through a small non-bleeding ulceration (Figure A). Computed tomography confirmed extraluminal presence of an IVC strut perforating into the duodenum (Figure B). Colonoscopy was significant for a large fungating and easily friable mass partially obstructing the ascending colon lumen (Figure C). Biopsies of the mass resulted as invasive adenocarcinoma. She underwent right hemicolectomy with ileocolonic anastomosis and was discharged to a skilled nursing facility.

Discussion: This patient presented with weakness and microcytic anemia. Bidirectional endoscopy revealed invasive colonic adenocarcinoma which was the likely etiology of her symptoms. EGD demonstrated perforation of the duodenum by IVC filter; this is a rare complication that usually presents with severe abdominal pain or gastrointestinal hemorrhage. However, this patient was asymptomatic, and the decision was made to manage the filter conservatively particularly in the setting of her need for urgent surgical management of her colon cancer.

Figure: IVC filter incidentally found in duodenum on endoscopy (A), demonstrated on imaging (B). Large colonic mass (C) found on colonoscopy was the more likely cause of patient's anemia.