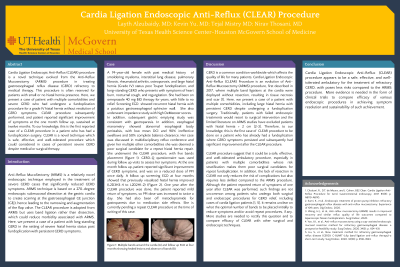 Introduction: CLEAR evolved from Anti-Reflux MucoSectomy (ARMS) and uses band ligation rather than dissection. We present a case of a patient status post fundoplication with persistent reflux symptoms.

Discussion: While ARMS procedure has gained popularity as a minimally invasive endoscopic intervention for refractory GERD, major risks involved with it include bleeding, perforation, and dysphagia [4, 5]. In CLEAR, multiple band ligations at the cardia are deployed without resection, resulting in tissue necrosis to suppress backflow by scar formation [3, 7]. Traditionally, patients with failed endoscopic treatments would resort to surgical intervention and the limited literature on ARMS studies have excluded patients with hiatal hernia > 2 cm [8-10]. Therefore, to our knowledge, this is the first case of CLEAR performed on a patient who had already undergone fundoplication. Although the patient reported return of symptoms of one year after CLEAR was performed, such findings are not uncommon among patients who undergo both surgical and endoscopic procedures for GERD relief, including cases of cardia ligation patients [7, 11]. It remains unclear at this time what the optimal number of bands to be placed initially to reduce symptoms or avoid repeat procedures. Nevertheless, this case demonstrates that CLEAR could be a safe, effective, and well-tolerated ambulatory procedure, especially in patients with who are poor surgical candidates for repeat fundoplication.