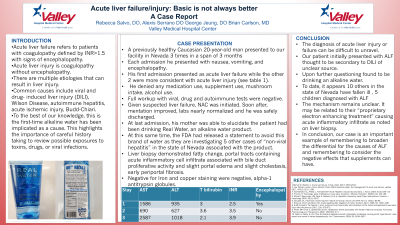 Introduction: Acute liver failure refers to patients with coagulopathy defined by INR >1.5 with signs of encephalopathy. Acute liver injury is coagulopathy without encephalopathy. There are multiple etiologies that can result in liver injury. Common causes include viral and drug- induced liver injury (DILI), Wilson Disease, autoimmune hepatitis, acute ischemic injury, Budd-Chiari. To the best of our knowledge, this is the first-time alkaline water has been implicated as a cause. This highlights the importance of careful history taking to review possible exposures to toxins, drugs, or viral infections.

Case Description/Methods: A previously healthy Caucasian 20-year-old man presented to our facility in Nevada 3 times in a span of 3 months with nausea, vomiting, and encephalopathy. His first admission presented as acute liver failure while the other 2 were more consistent with acute liver injury (see table 1). He denied any medication use, supplement use, mushroom intake, alcohol use. Full workup with viral, drug and autoimmune tests were negative. Given liver failure, NAC was initiated. Soon after, mentation improved, labs nearly normalized and he was safely discharged. Upon his most recent admission, his mother was able to elucidate the patient had been drinking Real Water, an alkaline water product. At this same time, the FDA had released a statement to avoid this brand of water as they are investigating 5 other cases of “non-viral hepatitis” in the state of Nevada associated with the product. To determine mechanism of injury, he underwent a liver biopsy. This demonstrated fatty change, portal tracts containing acute inflammatory cell infiltrate associated with bile duct proliferative activity and slight portal edema and slight cholestasis, early periportal fibrosis. Iron and copper stains were negative, alpha-1 antitrypsin globules were not identified. With supportive care, labs down trended and he was discharged.

Discussion: The diagnosis of acute liver injury or failure can be difficult to unravel. Our patient initially presented with ALF thought to be secondary to DILI of unclear source, but upon further questioning found to have consumed alkaline water. The mechanism remains uncertain. It may be related to their “proprietary electron enhancing treatment” causing acute inflammatory infiltrate as noted on liver biopsy. In conclusion, our case is an important example of remembering to broaden the differential for the causes of ALF and remembering to consider the negative effects that supplements can have.