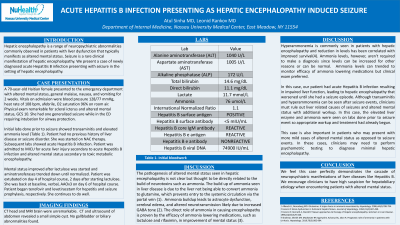 Introduction: Hepatic encephalopathy is a range of neuropsychiatric abnormalities commonly observed in patients with liver dysfunction that typically manifests as altered mental status or neuromuscular deficits. Although physicians who are treating patients with known hepatic dysfunction know to look for these clinical signs and symptoms, the reverse thought process isn’t always considered. Seizure is a clinical manifestation of hepatic encephalopathy that is uncommonly seen, and hepatobiliary etiology may not be considered without a known history.

Case Description/Methods: We present a case of a 70-year-old Haitian female with PMH hypertension and subarachnoid hemorrhage who presented to the emergency department with altered mental status, general malaise, nausea, and vomiting for 2 weeks. Patient had one generalized seizure while in the ED. Initial bloodwork revealed ALT 1040 U/L, AST 1005 U/L, ALP 172 U/L, total bilirubin 14.6 mg/dL, acetaminophen level < 7 ug/dL, and an ammonia level of 76 μmol/L in labs drawn prior to seizure event. Patient had no previous history of liver or neurological disease. Patient was admitted to MICU for acute liver injury secondary to likely viral hepatitis infection and altered mental status secondary to toxic metabolic encephalopathy. Subsequent labs showed hepatitis B surface antigen positive, hepatitis B E antigen positive, hepatitis B core IgM and IgG positive, and HBV viral DNA level 74,900 IU/mL. Mental status improved after lactulose was initiated and aminotransferases trended down until normalized. Patient began tenofovir and levetiracetam with outpatient gastroenterology and neurology follow up.

Discussion: We choose to present this case because we believe the steps we took in the management of this patient resulted in a good outcome. The initial CT scan of the head helped us rule out any intracranial etiology for the neurological dysfunction seen. The transaminitis and hyperammonemia on the initial blood work changed our focus to the hepatobiliary system. We gave n-acetylcysteine therapy until hepatitis serologies and acetaminophen levels could be obtained. Once acute hepatitis B infection was found to be the cause of the neurological dysfunction, we were able to treat her appropriately with lactulose and subsequently tenofovir. In conclusion, hepatobiliary pathology must be considered in patients who present with altered mental status and seizure or the etiology may be missed, resulting in poor patient outcome.