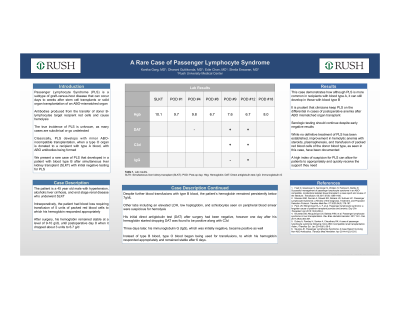 Introduction: Passenger Lymphocyte Syndrome (PLS) is a subtype of graft-versus-host disease that can occur days to weeks after stem cell transplants or solid organ transplantation of an ABO-mismatched organ. Antibodies produced from the transfer of donor B-lymphocytes target recipient red cells and cause hemolysis. The true incidence of PLS is unknown, as many cases are subclinical or go undetected. Classically, PLS develops with minor ABO-incompatible transplantation, when a type O organ is donated to a recipient with type A blood, with ABO antibodies being formed. We present a rare case of PLS that developed in a patient with blood type B after simultaneous liver kidney transplant (SLKT) with initial negative testing for PLS.

Case Description/Methods: The patient is a 45 year old male with hypertension, alcoholic liver cirrhosis, and end stage renal disease who underwent SLKT. Intraoperatively, the patient had blood loss requiring transfusion of 5 units of packed red blood cells to which his hemoglobin responded appropriately. After surgery, his hemoglobin remained stable at a level of 9-10 g/dL until postoperative day 8 when it dropped about 3 units to 6.7 g/dL. Despite further blood transfusions with type B blood, the patient’s hemoglobin remained persistently below 7g/dL. Other labs including an elevated LDH, low haptoglobin, and schistocytes seen on peripheral blood smear were suspicious for hemolysis. Initial direct antiglobulin test (DAT) after surgery had been negative, however one day after his hemoglobin started dropping it was found to be positive along with C3d. Three days later, his immunoglobulin G (IgG), which was initially negative, became positive as well. Instead of type B blood, type O blood began being used for transfusions, to which his hemoglobin responded appropriately and remained stable after 6 days.

Discussion: This case demonstrates how although PLS is more common in recipients with blood type A, it can still develop in those with blood type B. It is prudent that clinicians keep PLS on the differential in cases of postoperative anemia after ABO mismatched organ transplant and continue serologic testing even despite early negative results. While no definitive treatment of PLS has been established, improvement in hemolytic anemia with steroids, plasmapheresis, and transfusion of packed red blood cells of the donor blood type, as seen in this case, have been documented. A high index of suspicion for PLS can allow for patients to appropriately and quickly receive the support they need.