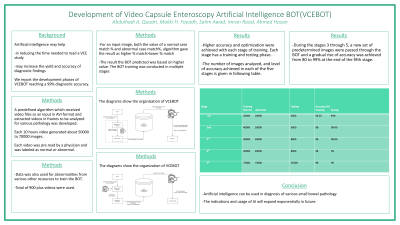 Introduction: Artificial intelligence may help in reducing the time needed to read a VCE study and may increase the yield and accuracy of diagnostic findings. We report the development phases of VCEBOT resulting in 99% diagnostic accuracy

Methods: A predefined algorithm which received video files as an input in AVI format and extracted videos in frames to be analyzed for various pathology was developed. Each 10 hours video generated about 50000 to 70000 images. Each video was pre read by a physician and was labeled as normal or abnormal. Data was also used for abnormalities from various other resources to train the BOT. Total of 900 plus videos were used. For an input image, both the value of a normal case match % and abnormal case match%, algorithm gave the result as higher % match >lower % match, the result the BOT predicted was based on higher value. The BOT training was conducted in multiple stages.

Results: Higher accuracy and optimization were achieved with each stage of training. Each stage had a training and testing phase. The number of images analyzed, and level of accuracy achieved in each of the five stages is given in the table 1

During the stages 3 through 5, a new set of predetermined images were passed through the BOT and a gradual rise of accuracy was achieved from 80 tom 99% at the end of the fifth stage.

Discussion: Artificial intelligence can be used in diagnosis of various small bowel pathology. The indications and usage of AI in health care will expand exponentially in future