P1988 - Cytomegalovirus Enteritis as a Cause of Recurrent Upper GI Bleed 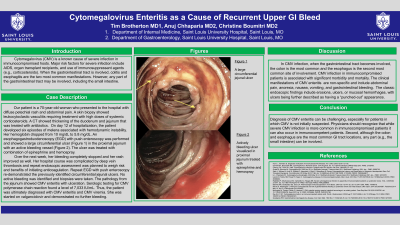 Case Description/Methods: We describe a case of 70-year-old woman who presented to the hospital with diffuse petechial rash and abdominal pain. A skin biopsy showed leukocytoclastic vasculitis requiring treatment with high doses of systemic corticosteroids. A CT showed thickening of the duodenum and jejunum that was treated with antibiotics. On hospital day 12, the patient developed six episodes of melena associated with hemodynamic instability. Her hemoglobin dropped from 10 mg/dL to 5.8 mg/dL. An esophagogastroduodenoscopy (EGD) with push enteroscopy was performed and showed a large circumferential ulcer (Figure 1A) in the proximal jejunum with an active bleeding vessel (Figure 1B). The ulcer was treated with a combination of epinephrine and hemospray.
Over the next week, her bleeding had completely stopped and her rash improved as well. Hospital course was complicated by deep vein thrombosis and repeat endoscopic assessment was planned to weigh the risk and benefit of initiating anticoagulation. Repeat EGD with push enteroscopy re-demonstrated the previously identified circumferential jejunal ulcers. No active bleeding was identified and biopsies were taken. The pathology from the jejunum showed CMV enteritis with ulceration. Serologic testing for CMV polymerase chain reaction found a level of 7,033 IU/mL. Thus, the patient was ultimately diagnosed with CMV enteritis and CMV viremia. She was started on valganciclovir and demonstrated no further bleeding.

Discussion: In summary, we present a rare case of CMV enteritis manifesting as gastrointestinal bleeding with no involvement of esophagus and colon that are traditionally associated with CMV infection. Diagnosis of CMV enteritis can be challenging, especially for patients in which CMV is not initially suspected.