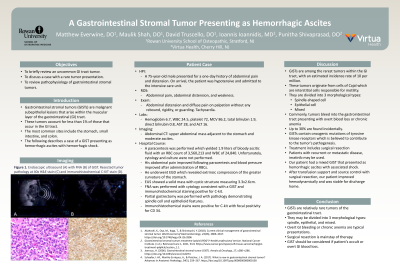 Introduction: Gastrointestinal stromal tumors (GISTs) are malignant subepithelial lesions that arise within the muscular layer of the gastrointestinal (GI) tract. These tumors account for less than 1% of those that occur in the GI tract. Implicated sites include the stomach, small intestine, and colon. The following describes a case of a GIST presenting as hemorrhagic ascites with hemorrhagic shock.

Case Description/Methods: A 75-year-old male presented for a one day history of abdominal pain and distension. On arrival, the patient was hypotensive and admitted to the intensive care unit. Labs showed a hemoglobin 6.7, WBC 24.5, platelet 72, MCV 86.2, total bilirubin 1.9, direct bilirubin 0.8, AST 28, and ALT 16. Abdominal CT scan was obtained demonstrating a upper abdominal mass adjacent to the stomach and moderate ascites. A paracentesis was performed which yielded 1.9 liters of bloody ascitic fluid with a RBC count of 3,560,213 and WBC of 24,840. Unfortunately, cytology and culture were not performed. His abdominal pain improved following paracentesis and blood pressure improved after administration of RBCs. He underwent EGD which revealed extrinsic compression of the greater curvature of the stomach. EUS showed a solid mass with cystic structure measuring 3.3x2.6cm. FNA was performed with cytology consistent with a GIST and immunohistochemical staining positive for C-kit. Partial gastrectomy was performed with pathology demonstrating spindle cell and epithelioid features. Immunohistochemical stains were positive for C-kit with focal positivity for CD 34.

Discussion: GISTs are among the rarest tumors within the GI tract, with an estimated incidence rate of 10 per million. These tumors originate from cells of Cajal which are interstitial cells responsible for motility. GISTs are divided into 3 morphological types: spindle-shaped cell, epithelial cell and mixed. Commonly, tumors bleed into the gastrointestinal tract presenting with overt blood loss or chronic anemia. However, some studies have shown up to 30% are found incidentally. Commonly, GISTs contain oncogenic mutations of tyrosine kinase receptors which is believed to contribute to the tumor’s pathogenesis. Treatment includes surgical resection and in patients with recurrent or metastatic disease, imatinib is used. Our patient had a mixed GIST that presented as hemorrhagic ascites with associated shock. After transfusion support and source control with surgical resection, our patient improved hemodynamically and was stable for discharge home. 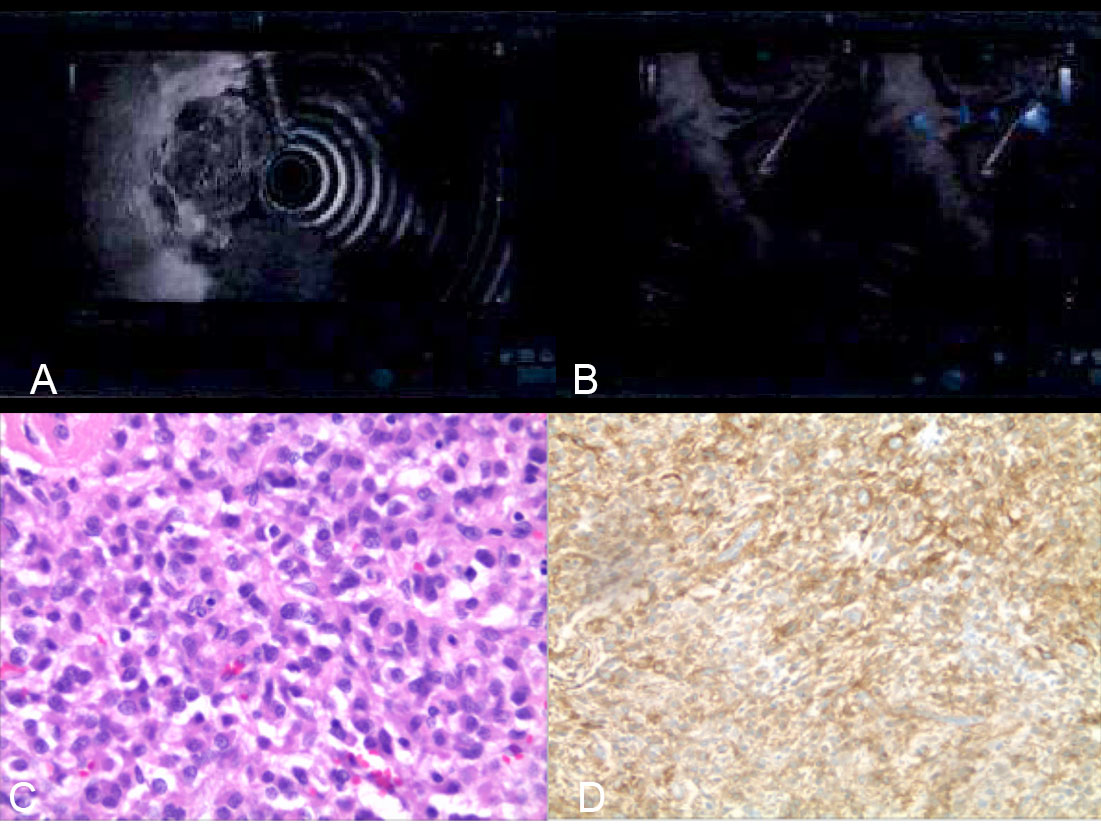