P2247 - Chilaiditi Syndrome: A Rare Presentation of Recurring Abdominal Pain in a Pediatric Patient With Tetralogy of Fallot 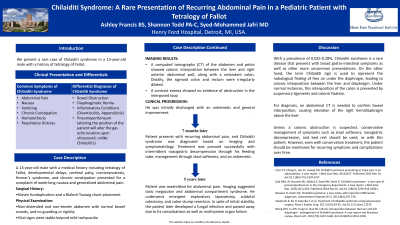 Introduction: Chilaiditi syndrome, a condition of abnormal colon placement, is a rare disorder whose symptomatology and prognosis remains unclear, and even less is known among diagnosed children. We present a rare case of Chilaiditi syndrome in a pediatric patient with a history of tetralogy of Fallot.

Case Description/Methods: A 13-year-old male with a medical history including tetralogy of Fallot, developmental delays, cerebral palsy, craniosynostosis, Horner’s syndrome, and chronic constipation presented for a complaint of week-long nausea and generalized abdominal pain. His surgical history includes a Nissen fundoplication and a Blalock-Taussig shunt placement. Physical examination included a non-distended and non-tender abdomen with normal bowel sounds, and no guarding or rigidity. Vital signs were stable beyond mild tachycardia. A computed tomography (CT) of the abdomen and pelvis showed colonic interposition between the liver and right anterior abdominal wall, along with a redundant colon. Distally, the sigmoid colon and rectum were irregularly dilated. A contrast enema showed no evidence of obstruction in the interposed loop. He was initially discharged with an antiemetic and general improvement. Seven months later, he presented with recurring abdominal pain, and Chilaiditi syndrome was diagnosed based on imaging and symptomatology. Treatment was pursued successfully with intermittent nasogastric decompression through his feeding tube, management through stool softeners, and an antiemetic. Five years later, the patient was readmitted for abdominal pain. Imaging suggested toxic megacolon and abdominal compartment syndrome. He underwent emergent exploratory laparotomy, subtotal colectomy, and colon stump resection. In spite of initial stability, the patient later developed a fungal infection and passed away due to its complications as well as multisystem organ failure.

Discussion: The presence of air under the diaphragm due to a right colonic interposition between the liver and the right diaphragm is a rare disorder known as Chilaiditi’s sign, also known as Chilaiditi syndrome when symptoms are present. For diagnosis, an abdominal CT is needed to confirm bowel interposition. Unless a colonic obstruction is suspected, conservative management of symptoms such as stool softeners and nasogastric decompression should be used. However, even with conservative treatment, the patient should be monitored for recurring symptoms and complications over time.