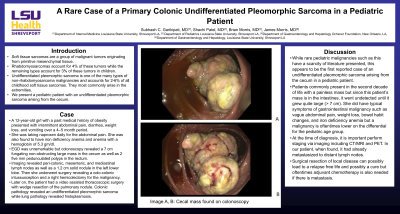 Introduction: Soft tissue sarcomas are a group of malignant tumors originating from primitive mesenchymal tissue. Rhabdomyosarcomas account for 4% of these tumors while the remaining types account for 3% of these tumors in children. Undifferentiated pleomorphic sarcoma is one of the many types of non-rhabdomyosarcoma malignancies and accounts for 2-6% of all childhood soft tissue sarcomas. They most commonly arise in the extremities. We present a pediatric patient with an undifferentiated pleomorphic sarcoma arising from the cecum.

Case Description/Methods: A 12-year-old girl with a past medical history of obesity presented with intermittent abdominal pain, diarrhea, weight loss, and vomiting over a 4–5 month period. She was taking naproxen daily for the abdominal pain. She was also found to have iron deficiency anemia and anemia with a hemoglobin of 5.3 gm/dl. EGD was unremarkable but colonoscopy revealed a 7 cm fungating non-obstructing large mass in the cecum as well as 2 five mm pedunculated polyps in the rectum. Imaging revealed peri-colonic, mesenteric, and mediastinal lymph nodes as well as a 1.2 cm solid nodule in the left lower lobe. Then she underwent surgery revealing a colo-colonic intussusception and a right hemicolectomy for the malignancy. Later on, the patient had a video assisted thoracoscopic surgery with wedge resection of the pulmonary nodule. Colonic pathology revealed an undifferentiated pleomorphic sarcoma while lung pathology revealed histoplasmosis.

Discussion: While rare pediatric malignancies such as this have a scarcity of literature presented, this appears to be the first reported case of an undifferentiated pleomorphic sarcoma arising from the cecum in a pediatric patient. Patients commonly present in the second decade of life with a painless mass but since this patient’s mass is in the intestines, it went undetected until it grew quite large ( > 7 cm). She did have typical symptoms of gastrointestinal malignancy such as vague abdominal pain, weight loss, bowel habit changes, and iron deficiency anemia but a malignancy is oftentimes lower on the differential for the pediatric age group. At the time of diagnosis, it is important perform staging via imaging including CT/MRI and PET. In our patient, when found, it had already metastasized to distant lymph nodes. Surgical resection of local disease can possibly lead to a relapse free life and possibly a cure but oftentimes adjuvant chemotherapy is also needed if there is metastasis. 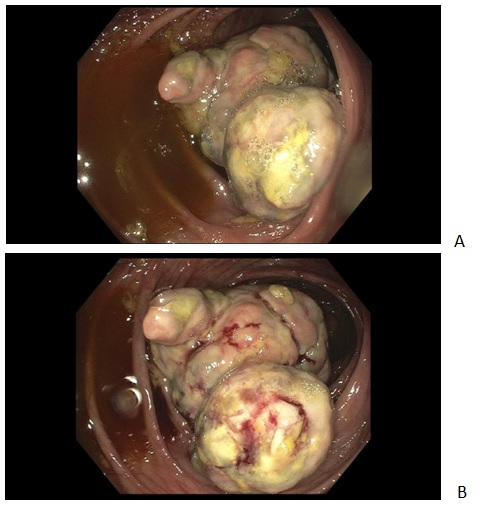 Figure: A and B: Colonoscopy revealed a fungating non-obstructing, non-circumferential large mass in the cecum. The mass measured seven cm in length and 5 mm in diameter.