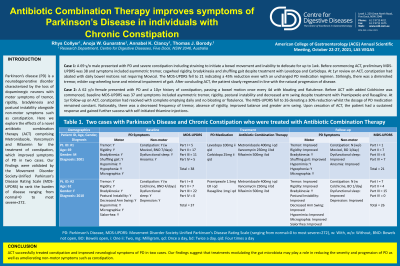 Introduction: Parkinson’s disease (PD) is a neurodegenerative disorder characterized by the loss of dopaminergic neurons with motor symptoms of tremor, rigidity, bradykinesia and postural instability alongside non-motor symptoms such as constipation. Here we explore the effects of a novel antibiotic combination therapy (ACT) comprising Metronidazole, Vancomycin and Rifaximin for the treatment of constipation, which improved symptoms of PD in two cases. Our findings were validated by the Movement Disorder Society-Unified Parkinson’s Disease Rating Scale (MDS-UPDRS) to rank the burden of disease ranging from normal=0 to most severe=272.

Case Description/Methods: Case 1 A 69 y/o male presented with PD and severe constipation including straining to initiate a bowel movement and inability to defecate for up to 1wk. Before commencing ACT, preliminary MDS-UPDRS was 38 and symptoms included asymmetric tremor, cogwheel rigidity, bradykinesia and shuffling gait despite treatment with Levodopa and Carbidopa. At 1yr review on ACT, constipation had abated with daily bowel motions not requiring Movicol. The MDS-UPDRS fell to 21 indicating a 45% reduction even with an unchanged PD medication regimen. Strikingly, there was a diminished tremor, milder cog-wheeling tone and minimal impairment of gait. After concluding ACT, the patient slowly regressed in line with the natural progression of disease.

Case 2 A 62 y/o female presented with PD and a 10yr history of constipation, passing a bowel motion once every 4d with bloating and flatulence. Before ACT with added Colchicine was commenced, baseline MDS-UPDRS was 37 and symptoms included asymmetric tremor, rigidity, postural instability and decreased arm swing despite treatment with Pramipexole and Rasagiline. At 1yr follow-up on ACT, constipation had resolved with complete emptying daily and no bloating or flatulence. The MDS-UPDRS fell to 26 denoting a 30% reduction whilst the dosage of PD medication remained constant. Noticeably, there was a decreased frequency of tremor, absence of rigidity, improved balance and greater arm swing. Upon cessation of ACT, the patient had a sustained response and gained further success with self-initiated thiamine injections.

Discussion: ACT successfully treated constipation and improved neurological symptoms of PD in two cases. Our findings suggest that treatments modulating the gut microbiota may play a role in reducing the severity and progression of PD as well as ameliorating non-motor symptoms such as constipation.