P2383 - Assessing the Influence of Tobacco, Alcohol, and Marijuana on the Development of Eosinophilic Esophagitis 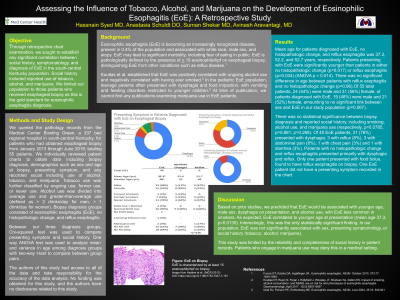 Introduction: Eosinophilic esophagitis (EoE) is becoming an increasingly recognized disease present in 0.4% of the population. Through retrospective chart examination, we sought to establish any significant correlation between social history, symptomatology, and diagnosis of EoE in the south-central Kentucky population. Social history included reported use of tobacco, alcohol, and marijuana. We limited our population to those patients who received esophageal biopsy as this is the gold standard for eosinophilic esophagitis diagnosis.

Methods: We queried the pathology records from the Medical Center Bowling Green, a 337 bed regional hospital in south-central Kentucky, for patients who had obtained esophageal biopsy from January 2013 through June 2019, totaling 55 patients. We individually reviewed patient charts to obtain data including biopsy diagnosis, demographics such as sex and age at biopsy, presenting symptom, and any recorded social including use of alcohol, tobacco, and marijuana. Biopsy diagnosis groups consisted of eosinophilic esophagitis (EoE), no histopathologic change, and reflux esophagitis. Between our three diagnosis groups, Chi-squared test was used to compare presenting symptom and social history. One-way ANOVA test was used to analyze mean and variance in age among diagnosis groups with two-way t-test to compare between group pairs.

Discussion: Based on prior studies, we predicted that EoE would be associated with younger age, male sex, dysphagia on presentation, and alcohol use, with EoE less common in smokers. As expected, EoE correlated to younger age at presentation (mean age 37.3, p=0.0135). Interestingly, this was the only statistically significant finding. In our population, EoE was not significantly associated with sex, presenting symptomology, or social history (tobacco, alcohol, marijuana).