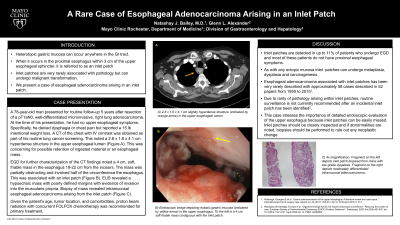 Introduction: An inlet patch is an area of ectopic gastric mucosa that involves the most proximal esophagus within 3 cm of the upper esophageal sphincter. Though inlet patches are frequently noted on upper endoscopy, they are only rarely associated with clinically significant proximal esophageal pathology. We describe a case of an adenocarcinoma arising from an inlet patch in an asymptomatic 78-year-old man.

He endorsed a 15 lb intentional weight loss but denied dysphagia, odynophagia, or pulmonary symptoms. Surveillance CT scan of his chest noted a new 2.8 x 1.6 x 4.1 cm hyperdense structure in the upper esophageal lumen concerning for ingested material or an esophageal mass without adenopathy. EGD was performed revealing a 4 cm, soft, friable mass just below the proximal esophageal sphincter associated with an inlet patch. Endoscopic ultrasound noted the gastric inlet patch with a hypoechoic mass with poorly defined margins. The mass measured up to 12 mm in thickness with evidence of invasion into the muscularis propria, (T2 N0 M0). Biopsy revealed intramucosal adenocarcinoma arising from ectopic gastric mucosa. Given his age and tumor location, proton beam radiation with concurrent FOLFOX chemotherapy were recommended as primary treatment.

Discussion: Although gastric heterotopic tissue can occur anywhere in the gastrointestinal tract, inlet patches refer to heterotopic tissue within the proximal part of the esophagus. Inlet patches occur in up to 11% of patients undergoing EGD. Most patients do not have proximal esophageal symptoms. When symptomatic, they may present with chest or throat discomfort, dysphagia, or a globus sensation presumably due to acid production or possible Helicobacter pylori infection. As with any ectopic mucosa, there is risk of metaplasia, dysplasia and carcinogenesis. Inlet patches have been associated rarely esophageal adenocarcinoma with less than 20 cases by 2004. Because of the rarity of the association between inlet patches and esophageal adenocarcinoma, there is no clear consensus concerning the need for surveillance. This case serves to stress the importance of performing a detailed endoscopic evaluation of the upper esophagus with close inspection of any heterotopic gastric mucosa with biopsies of abnormal areas noted.