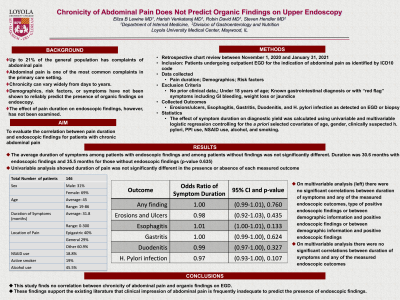 Introduction: Up to 21% of the general population has complaints of abdominal pain and it is one of the most common complaints in the primary care setting. Chronicity can vary widely from days to years. Demographics, risk factors, or symptoms have not been shown to reliably predict the presence of organic findings on endoscopy. The effect of pain duration on endoscopic findings, however, has not been examined.

Methods: Electronic records at a tertiary teaching hospital were retrospectively examined to identify patients undergoing outpatient EGD for the indication of abdominal pain as identified by ICD10 code between November 1, 2020 and January 31, 2021. Prior clinical data was then reviewed for information on pain duration, location, and other relevant history. Patients were excluded if they had no prior clinical data, were under 18 years of age, had a known gastrointestinal diagnosis, or had “red flag” symptoms including GI bleeding, weight loss or jaundice. Outcomes included erosions/ulcers, esophagitis, gastritis, duodenitis, and h. pylori infection as detected on EGD or biopsy. The effect of symptom duration on diagnostic yield was calculated using univariable and multivariable logistic regression controlling for the a priori selected covariates of age, gender, clinically suspected h. pylori, PPI use, NSAID use, alcohol, and smoking.

Discussion: This study finds no correlation between chronicity of abdominal pain and organic findings on EGD. These findings support the existing literature that clinical impression of abdominal pain is frequently inadequate to predict the presence of organic endoscopic findings.