P2536 - Conservative Management of a Misplaced PEG in the Colon 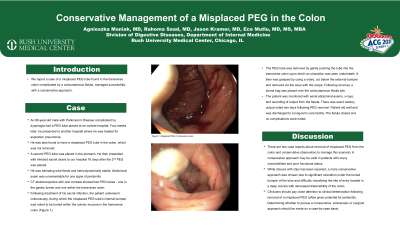 Introduction: We report a case of a misplaced PEG tube found in the transverse colon complicated by a colocutaneous fistula, managed successfully with a conservative approach.

Case Description/Methods: An 86-year-old male with Parkinson’s Disease complicated by dysphagia had a PEG tube placed at an outside hospital. Four weeks later, he presented to another hospital where he was treated for aspiration pneumonia. He was also found to have a misplaced PEG tube in the colon, which was not removed. A second PEG tube was placed in the stomach. He then presented with infected sacral ulcers to our hospital 16 days after the 2nd PEG was placed. He was tolerating tube feeds and hemodynamically stable. Abdominal exam was unremarkable for any signs of peritonitis. CT abdomen/pelvis with oral contrast showed two PEG tubes - one in the gastric lumen and one within the transverse colon. Following treatment of his sacral infection, the patient underwent colonoscopy, during which the misplaced PEG tube’s internal bumper was noted to be buried within the colonic mucosa in the transverse colon (Figure 1). The PEG tube was removed by gently pushing the tube into the transverse colon upon which an ulceration was seen underneath. It then was grasped by using a snare, cut below the external bumper and removed via the anus with the scope. Following removal, a stoma bag was placed over the colocutaneous fistula site. The patient was monitored with serial abdominal exams, x-rays, and recording of output from the fistula. There was scant ostomy output noted two days following PEG removal. Patient did well and was discharged to a long-term care facility. The fistula closed and no complications were noted.

Discussion: There are few case reports about removal of misplaced PEG from the colon and conservative observation to manage this scenario. A conservative approach may be valid in patients with many comorbidities and poor functional status. While closure with clips has been reported, a more conservative approach was chosen due to significant ulceration under the buried bumper of the tube and difficulty visualizing the site of entry located in a deep crevice with decreased distensibility of the colon. Clinicians should pay close attention to clinical deterioration following removal of a misplaced PEG tube given potential for peritonitis. Determining whether to pursue a conservative, endoscopic or surgical approach should be made on a case-by-case basis. 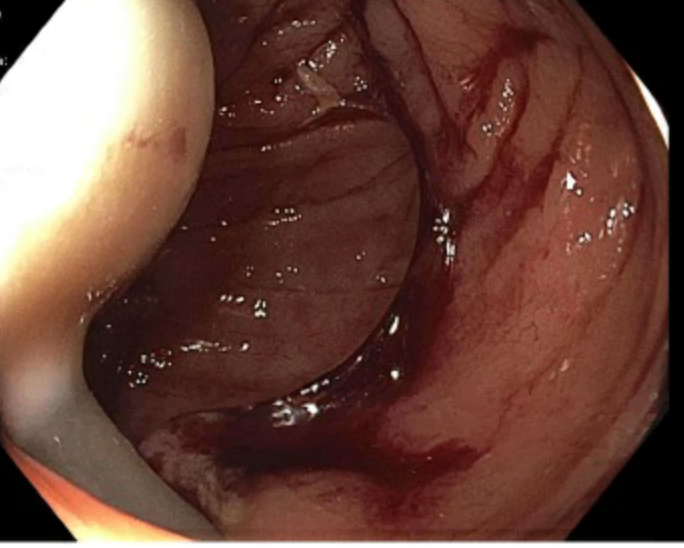