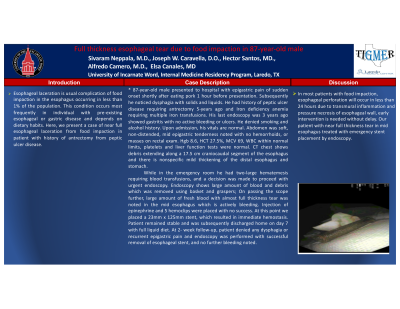 Introduction: Esophageal laceration is a usual complication of food impaction in the esophagus occurring in less than 1% of the population. This condition occurs most frequently in individuals with pre-existing esophageal or gastric disease and depends on dietary habits. Here, we present a case of near full esophageal laceration from food impaction in a patient with a history of antrectomy from peptic ulcer disease

Case Description/Methods: 87-year-old male presented to hospital with epigastric pain of sudden onset shortly after eating pork 1 hour before the presentation. Subsequently, he noticed dysphagia with solids and liquids. He had a history of peptic ulcer disease requiring antrectomy 5-years ago and Iron deficiency anemia requiring multiple iron transfusions. His last endoscopy was 3 years ago showed gastritis with no active bleeding or ulcers. He denied smoking and alcohol history. Upon admission, his vitals are normal. Abdomen was soft, non-distended, mid epigastric tenderness noted with no hemorrhoids, or masses on rectal exam. Hgb 8.6, HCT 27.5%, MCV 69, WBC within normal limits, platelets, and liver function tests were normal. CT chest shows debris extending along a 17.5 cm craniocaudal segment of the esophagus and there is a nonspecific mild thickening of the distal esophagus and stomach.

While in the emergency room he had two large hematemesis requiring blood transfusions, and a decision was made to proceed with urgent endoscopy. Endoscopy shows a large amount of blood and debris which was removed using basket and graspers; On passing the scope further, a large amount of fresh blood with an almost full-thickness tear was noted in the mid esophagus which is actively bleeding. Injection of epinephrine and 5 hemoclips were placed with no success. At this point, we placed a 23mm x 125mm stent, which resulted in immediate hemostasis. Patient remained stable and was subsequently discharged home on day 7 with a full liquid diet. At 2- week follow-up, the patient denied any dysphagia or recurrent epigastric pain, and endoscopy was performed with successful removal of the esophageal stent, and no further bleeding noted.

Discussion: In most patients with food impaction, the esophageal perforation will occur in less than 24 hours due to transmural inflammation and pressure necrosis of the esophageal wall, early intervention is needed without delay. Our patient with a near full-thickness tear in mid esophagus treated with emergency stent placement by endoscopy. 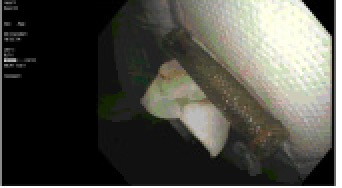