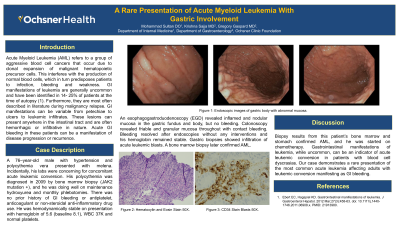 Introduction: Acute Myeloid Leukemia (AML) refers to a group of aggressive blood cell cancers that occur due to clonal expansion of malignant hematopoietic precursor cells. This interferes with the production of normal blood cells, which in turn predisposes patients to infection, bleeding and weakness. GI manifestations of leukemia are generally uncommon and have been identified in 14- 25% of patients at the time of autopsy (1). Furthermore, they are most often described in literature during malignancy relapse. GI manifestations can be variable from petechiae to ulcers to leukemic infiltrates. These lesions can present anywhere in the intestinal tract and are often hemorrhagic or infiltrative in nature. Acute GI bleeding in these patients can be a manifestation of disease progression or recurrence.


Case Description/Methods: A 76-year-old male with hypertension and polycythemia vera presented with melena. Incidentally, his labs were concerning for concomitant acute leukemic conversion. His polycythemia was diagnosed in 2009 by bone marrow biopsy (JAK2 mutation +), and he was doing well on maintenance hydroxyurea and monthly phlebotomies. There was no prior history of GI bleeding or antiplatelet, anticoagulant or NSAID use. He was hemodynamically stable on presentation with hemoglobin (Hgb) of 5.6 (baseline 8.1), WBC 37K and normal platelets.


An esophagogastroduodenoscopy (EGD) revealed inflamed and nodular mucosa in the gastric fundus and body, but no bleeding. Colonoscopy revealed friable and granular mucosa throughout with contact bleeding. Bleeding resolved after endoscopies without any interventions and his Hgb remained stable. A bone marrow biopsy confirmed AML. Gastric biopsies later showed infiltration of acute leukemic blasts.

Discussion: Biopsy results from this patient’s bone marrow and stomach confirmed AML, and he was started on chemotherapy. Gastrointestinal manifestations of leukemia, while uncommon, can be an indicator of acute leukemic conversion in patients with blood cell dyscrasias. Our case demonstrates a rare presentation of the most common acute leukemia affecting adults with leukemic conversion manifesting as GI bleeding.