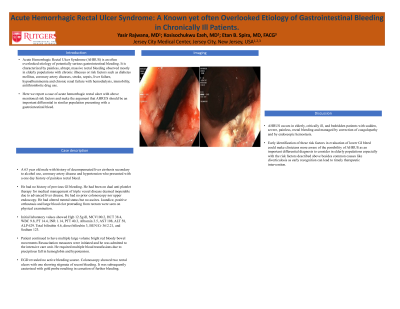 Here we report a case of acute hemorrhagic rectal ulcer with above mentioned risk factors and make the argument that AHRUS should be an important differential in similar population presenting with a gastrointestinal bleed.

Case Description/Methods: A 63 year old male with history of decompensated liver cirrhosis secondary to alcohol use, coronary artery disease and hypertension who presented with a one day history of painless rectal bleed. He had no history of previous GI bleeding. He had been on dual anti platelet therapy for medical management of triple vessel disease deemed inoperable due to advanced liver disease. He had no prior colonoscopy nor upper endoscopy. He had altered mental status but no ascites. Jaundice, positive orthostasis and large blood clot protruding from rectum were seen on physical examination.

Discussion: AHRUS occurs in elderly, critically ill, and bedridden patients with sudden, severe, painless, rectal bleeding and managed by correction of coagulopathy and by endoscopic hemostasis. Early identification of these risk factors in evaluation of lower GI bleed could make clinicians more aware of the possibility of AHRUS as an important differential diagnosis to consider in elderly populations especially with the risk factors described above besides common causes like diverticulosis as early recognition can lead to timely therapeutic intervention.

Figure: Rectal Ulcer before and after Gold Probe Cauterization