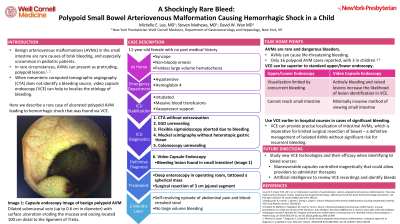 Case Description/Methods: An 11-year-old female with no past medical history presented with syncope, non-bloody emesis and painless large hematochezia with a hemoglobin of 4 g/dl. She was admitted to the intensive care unit for hypotension, was intubated, and received massive blood transfusions and vasopressor support. Due to hemodynamic instability she underwent CTA that showed no extravasation. Esophagogastroduodenoscopy was also unrevealing, and flexible sigmoidoscopy was aborted due to blood obscuring visualization. Meckel scintigraphy was negative for heterotopic gastric tissue. Colonoscopy showed blood extending through colon to ileum, but no bleeding source, so VCE was deployed for small bowel evaluation.

VCE showed a small submucosal lesion with surface ulceration in proximal small bowel. Given potential for surgical resection, she underwent deep enteroscopy in the operating room. Enteroscopy revealed a spherical mass in the jejunum. The mass was tattooed to guide resection of a 3 cm segment of jejunum. Pathology reported a markedly dilated submucosal vein (up to 0.6 cm in diameter) eroding the mucosa, likely a benign AVM.

Two months after surgery, the patient had abdominal pain and blood-streaked stool that self-resolved, but no recurrent large volume bleeding.

Discussion: Small intestine AVMs are difficult to identify as standard endoscopies cannot reach that portion of bowel. When CTA fails to identify the bleeding source and bleeding obscures the lumen, as with our patient, VCE is a minimally invasive modality in which concurrent bleeding and raised lesions increase the likelihood of lesion identification. To the best of our knowledge, there are only 13 polypoid AVM cases, with 2 reported in children. Whether flat or polypoid, AVMs can cause life-threatening bleeding in all patients. As such, it may be beneficial to use VCE earlier in cases of significant bleeding. VCE can provide precise localization of intestinal AVMs, which is imperative for limited surgical resection of bowel – a definitive management of isolated AVMs. 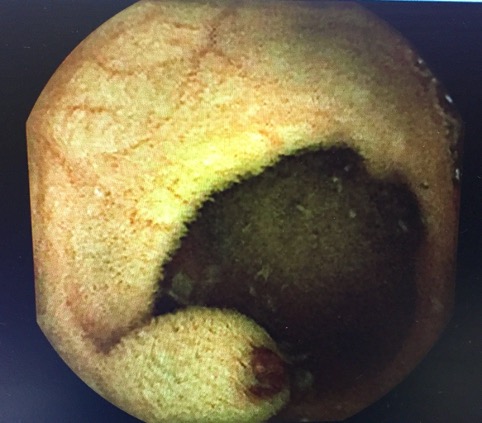 Figure: Dilated submucosal vein (up to 0.6 cm in diameter) with surface ulceration eroding the mucosa and oozing located 100 cm distal to the ligament of Treitz. Likely a benign AVM.