P2698 - Behçet’s Disease in a Patient Diagnosed With Ulcerative Proctitis 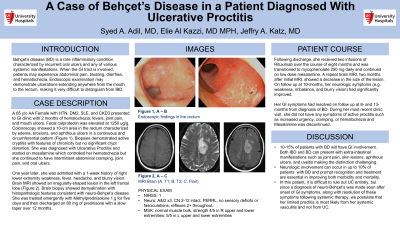 Introduction: Behçet’s disease (BD) can present with gastrointestinal findings in 15% of patients. Endoscopy may show findings similar to those seen in IBD. We present a case of a 65-year-old woman diagnosed with ulcerative proctitis (UP) who later developed neuro-BD. Following treatment for BD, her GI symptoms completely resolved, making BD the likely cause of her colonic inflammation.

Case Description/Methods: A 65-year-old African American woman with hypertension, diabetes mellitus type 2, and chronic kidney disease stage 3 presented to clinic with a 2-month history of intermittent hematochezia associated with fevers, joint pain, and mouth ulcers. Labs were consistent with anemia of chronic disease. Fecal calprotectin was elevated at 1250 ug/g. An EGD showed multiple non-bleeding erosions in the stomach. Colonoscopy showed a 10-cm area in the rectum characterized by edema, erosions, and aphthous ulcers in a continuous and circumferential pattern (image 1). Biopsies demonstrated active cryptitis with features of chronicity but no significant crypt distortion with the most likely etiology being ulcerative proctitis. She was started on mesalamine with resolution of hematochezia but she continued to have intermittent abdominal cramping, joint pain, and oral ulcers. One year later, she was admitted to the hospital with a 1-week history of right lower extremity weakness, fever, headache, and blurry vision. Brain MRI showed an irregularly-shaped enhancing lesion in the left frontal lobe. Stereotactic brain biopsy showed demyelination with histopathologic features suggestive of neuro- Behçet’s disease. She was treated emergently with Methylprednisolone 1000 mg for five days and then discharged on 80 mg of prednisone with a slow taper over 12 months. Additionally, she received two infusions of Rituximab over the course of eight months following discharge and was then transitioned to mycophenolate 250 mg daily. A repeat brain MRI, two months after initial MRI, showed a decrease in the size of the lesion. On follow up at 10-months, her neurologic symptoms (e.g. weakness, imbalance, and blurry vision) were no longer present. Interestingly, she had no signs or symptoms of active colitis and we propose that her limited proctitis may actually have been a manifestation of BD and not UP.

Discussion: Both IBD and BD can present with intestinal and extra-intestinal findings such as joint pain, skin lesions, and aphthous ulcers. Though rare, providers should consider BD in their differential in such cases. 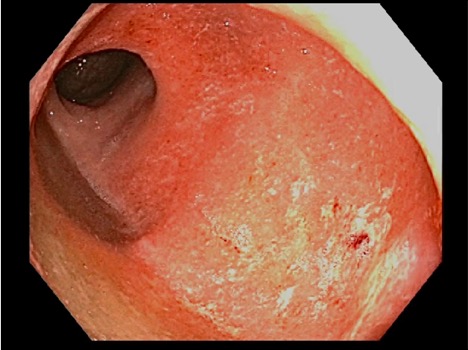