P2701 - A Case of Afferent Limb Syndrome: Endoscopic Balloon Dilation to the Rescue 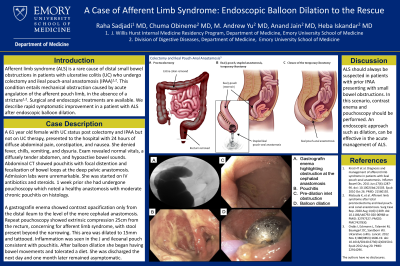 Introduction: Afferent limb syndrome (ALS) is a rare cause of distal small bowel obstruction in patients with ulcerative colitis (UC) who undergo colectomy and ileal pouch-anal anastomosis (IPAA)1,2. It entails mechanical obstruction caused by acute angulation of the afferent pouch limb, in the absence of a stricture1,2. Surgical and endoscopic treatments are available. We describe rapid symptomatic improvement in a patient with ALS after endoscopic balloon dilation.

Case Description/Methods: A 61 year old female with UC status post colectomy and IPAA but not on UC therapy, presented to the hospital with 24 hours of diffuse abdominal pain, constipation, and nausea. She denied fever, chills, vomiting, and dysuria. Exam revealed normal vitals, a diffusely tender abdomen, and hypoactive bowel sounds. Abdominal CT showed pouchitis with focal distention and fecalization of bowel loops at the deep pelvic anastomosis. Admission labs were unremarkable. She was started on IV antibiotics and steroids. 1 week prior she had undergone pouchoscopy which noted a healthy anastomosis with moderate chronic pouchitis on histology.

She completed a gastrografin enema which showed contrast opacification only from the distal ileum to the level of the more cephalad anastomosis. Repeat pouchoscopy showed extrinsic compression 25cm from the rectum, concerning for afferent limb syndrome, with stool present beyond the narrowing. This area was dilated to 15mm and tattooed. Inflammation was seen in the J and ileoanal pouch consistent with pouchitis. After balloon dilation she began having bowel movements and tolerated a diet. She was discharged the next day and one month later remains asymptomatic.

Discussion: ALS should always be suspected in patients with prior IPAA presenting with small bowel obstructions. In this scenario, contrast enema and pouchoscopy should be performed. An endoscopic approach such as dilation, can be effective in the acute management of ALS. 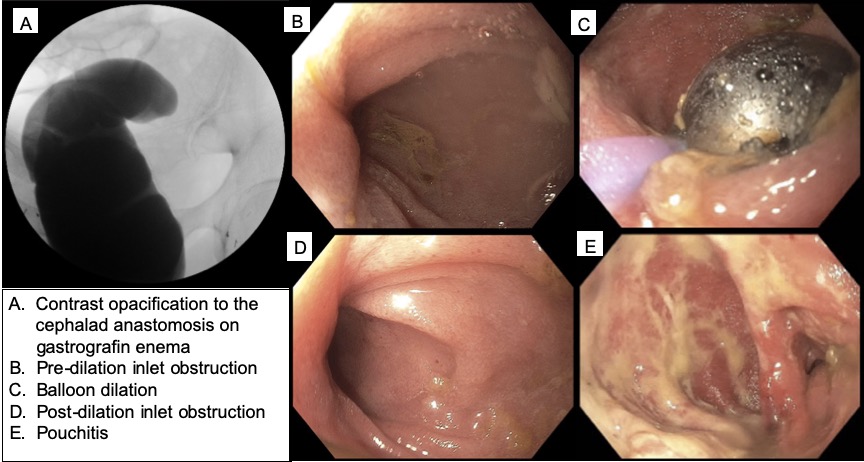