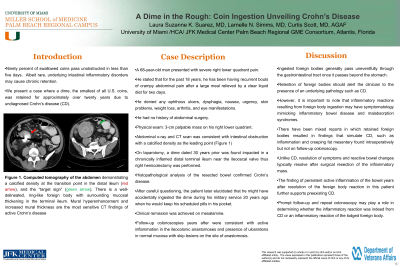 Introduction: Ninety percent of swallowed coins pass unobstructed in less than five days. Albeit rare, underlying intestinal inflammatory disorders may cause chronic retention. We present a case where a dime, the smallest of all U.S. coins, was retained for over twenty years due to undiagnosed Crohn’s disease (CD).

Case Description/Methods: A 68-year-old man presented with severe right lower quadrant pain. For the past 18 years, he has been having recurrent bouts of crampy abdominal pain after a large meal relieved by a clear liquid diet for 2-4 days. He denied any aphthous ulcers, dysphagia, nausea, urgency, skin problems, weight loss, arthritis, and eye manifestations. He had no history of abdominal surgery. A 3-cm right lower quadrant mass was palpated. Abdominal x-ray and CT scan were consistent with intestinal obstruction with a calcified density as the leading point (Figure 1). On laparotomy, a dime dated 30 years prior was found impacted in a chronically inflamed distal terminal ileum near the ileocecal valve thus right hemicolectomy was performed. Histopathological analysis confirmed Crohn’s disease. After careful questioning, the patient later elucidated that he might have accidentally ingested the dime during his military service 20 years ago when he would keep his scheduled pills in his pocket. Clinical remission was achieved on mesalamine. Follow-up colonoscopies years after were consistent with active inflammation in the ileocolonic anastomoses and presence of ulcerations in normal mucosa with skip lesions on the site of anastomosis.

Discussion: Ingested foreign bodies pass uneventfully through the gastrointestinal tract once it passes beyond the stomach. Retention of foreign bodies should alert the clinician to the presence of an underlying pathology such as CD. There have been mixed reports in which retained foreign bodies resulted in findings that simulate CD, such as inflammation and creeping fat mesentery found intraoperatively but not on follow-up colonoscopy. Unlike CD, resolution of symptoms and reactive bowel changes resolve after surgical resection of the inflammatory mass. The finding of persistent active inflammation of the bowel years after resolution of the foreign body reaction in this patient further supports preexisting CD. Prompt follow-up and repeat colonoscopy may play a role in determining whether the inflammatory reaction was indeed from CD or an inflammatory reaction of the lodged foreign body.

Figure: Figure 1. Computed tomography of the abdomen demonstrating a calcified density at the transition point in the distal ileum (red arrow), and the “target sign” (green arrow). There is a well-delineated, ring-like foreign body with surrounding mucosal thickening in the terminal ileum. Mural hyperenhancement and increased mural thickness are the most sensitive CT findings of active Crohn’s disease