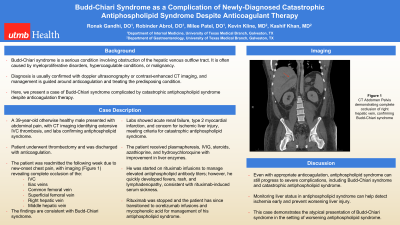 Introduction: Budd-Chiari syndrome (BCS) is a rare condition involving an obstruction of the hepatic venous outflow tract. It typically affects females in the third or fourth decades of life, and is often caused by myeloproliferative disorders, hypercoagulable conditions, or malignancy. Patient presentation can range from mild abdominal distention to gastrointestinal bleeding and encephalopathy. We report a unique case of a young male who was found to have BCS with ischemic liver injury in the setting of catastrophic antiphospholipid syndrome (CAPS) despite anticoagulant therapy.

Case Description/Methods: A 39-year-old otherwise healthy male presented to the hospital with abdominal and flank pain, where he was found to have extensive thrombosis of the IVC. Anticardiolipin and anti-beta-2-microglobulin antibodies confirmed the diagnosis of antiphospholipid syndrome (APS). He underwent thrombectomy with partial recanalization of the IVC and was discharged on therapeutic anticoagulation. The patient then returned to the hospital with complaints of chest pain. Imaging revealed complete occlusion of the IVC, iliac veins, as well as common femoral and superficial femoral veins. The right hepatic vein was completely occluded and the middle hepatic vein was partially occluded, consistent with BCS. The case was further complicated by acute renal failure, type 2 myocardial infarction, and ischemic liver injury with peak liver enzymes of Alkaline Phosphatase (ALP) 447U/L, ALT 10970U/L and AST 551U/L, thus meeting criteria for CAPS. INR goals were increased and the patient received plasmapheresis, IVIG, steroids, azathioprine, and hydroxychloroquine with improvement in liver enzymes. The patient was started on rituximab infusions to manage elevated antiphospholipid antibody titers; however, he quickly developed fevers, rash, and lymphadenopathy, consistent with rituximab-induced serum sickness. Rituximab was stopped and the patient has since transitioned to ocrelizumab infusions and mycophenolic acid for management of his APS.

Discussion: Despite compliance with anticoagulation, APS can still progress to further complications like CAPS and in our case, BCS. Frequent monitoring of a patient’s liver status is important in individuals with APS to identify ischemia early and to prevent worsening liver injury in the setting of APS. This unique case demonstrates the atypical presentation of BCS as a result of progressive APS in a young male on therapeutic anticoagulation and the complexity of management.