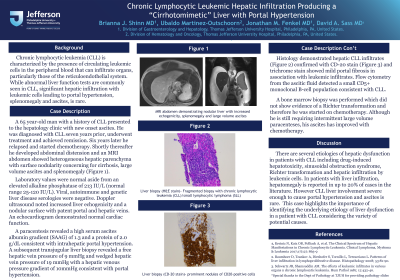 Introduction: Chronic lymphocytic leukemia (CLL) is characterized by the presence of circulating leukemic cells in the peripheral blood that can infiltrate organs, particularly those of the reticuloendothelial system. While abnormal liver function tests are commonly seen in CLL, significant hepatic infiltration with leukemic cells leading to portal hypertension, splenomegaly and ascites, is rare.

Case Description/Methods: A 65 year-old man with a history of CLL presented to the hepatology clinic with new onset ascites. He was diagnosed with CLL seven years prior, underwent treatment and achieved remission. Six years later he relapsed and started chemotherapy. Shortly thereafter he developed abdominal distension and an MRI abdomen showed heterogeneous hepatic parenchyma with surface nodularity concerning for cirrhosis, large volume ascites and splenomegaly.

A bone marrow biopsy was performed which did not show evidence of a Richter transformation and therefore he was started on chemotherapy. Although he is still requiring intermittent large volume paracenteses, his ascites has improved with chemotherapy.

Discussion: There are several etiologies of hepatic dysfunction in patients with CLL including drug-induced hepatotoxicity, sinusoidal obstruction syndrome, Richter transformation and hepatic infiltration by leukemic cells. In patients with liver infiltration, hepatomegaly is reported in up to 20% of cases in the literature. However CLL liver involvement severe enough to cause portal hypertension and ascites is rare. This case highlights the importance of identifying the underlying etiology of liver dysfunction in a patient with CLL considering the variety of potential causes.