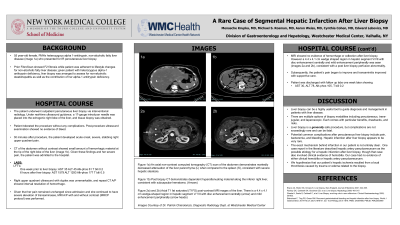 Introduction: Liver biopsy is a relatively safe procedure. We report a case of segmental liver infarction after outpatient liver biopsy.

Case Description/Methods: A 55-year-old female with past medical history consisting of heterozygous alpha-1 antitrypsin deficiency and non-alcoholic fatty liver disease underwent outpatient liver biopsy done to assess for non-alcoholic steatohepatitis and contribution of alpha-1 antitrypsin deficiency. Liver biopsy was completed under ultrasonographic guidance with no immediate complications. Thirty minutes after the procedure, the patient experienced severe right upper quadrant pain without vital sign derangement. The patient was admitted for observation and pain control. Admission labs were significant for aspartate transaminase of 1579 IU/L and alanine transaminase 1293 IU/L (both previously normal) with an alkaline phosphatase of 177 IU/L and normal total bilirubin level. Labs were otherwise normal and hemoglobin was unchanged. CT scan of the abdomen and pelvis showed scant subcapsular bleeding without other overt abnormality. The patient’s pain and aminotransferase elevation only minimally improved after two days of admission. MRI with IV contrast and MRCP protocol was obtained on day 3. MRCP demonstrated a 4.4 x 4.1 cm wedge-shaped region in hepatic segment V/VII with properties consistent with a perfusion abnormality. The patient eventually improved with supportive care and was discharged with subsequent complete resolution of her pain and normalization of aminotransferases.

Discussion: The current literature contains numerous reports of complications after liver biopsy, though only few describe hepatic infarction. The exact mechanism behind infarction in our patient is not entirely clear. One case report in the literature described hepatic artery pseudoaneurysm as the possible etiology for a hepatic infarction after liver biopsy, though that case also involved clinical evidence of hemobilia, which was not present in our case. We hypothesize that our patient’s hepatic ischemia resulted from a local thrombosis caused by trauma or edema related to the biopsy.