P3030 - A Push to Find the Answer: A Rare Case of Jejunal Lymphangioma 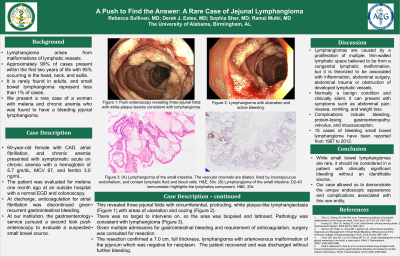 Introduction: Lymphangioma arises from malformations of lymphatic vessels.Approximately 90% of cases present within the first two years of life with 95% occurring in the head, neck, and axilla.It is rarely found in adults, and small bowel lymphangioma represent less than 1% of cases.We present a rare case of a woman with melena and chronic anemia who was found to have a bleeding jejunal lymphangioma.

Case Description/Methods: A 60-year-old female with coronary disease, atrial fibrillation, and chronic anemia presented with symptomatic acute on chronic anemia with a hemoglobin of 5.7gm/dL, MCV 67, and ferritin 3 ng/mL.The patient was evaluated for melena one month ago at an outside hospital with a normal esophagogastroduodenoscopy and colonoscopy.At discharge, anticoagulation for atrial fibrillation was discontinued given recurrent gastrointestinal bleeds.


At our institution, the gastroenterology service pursued a second look push enteroscopy to evaluate a suspected small bowel source.This revealed three jejunal folds with circumferential, protruding, white plaque-like lymphangiectasia with areas of ulceration and oozing.There was no target to intervene on, so the area was biopsied and tattooed.Pathology was consistent with lymphangioma. Given multiple admissions for gastrointestinal bleeding and requirement of anticoagulation, surgery was consulted for resection.The resection confirmed a 7 cm, full thickness, lymphangioma with arteriovenous malformation of the jejunum which was negative for neoplasm. The patient recovered and was discharged without further bleeding.

Discussion: Lymphangiomas are caused by a proliferation of multiple, thin-walled lymphatic space believed to be from a congenital lymphatic malformation, but it is theorized to be associated with inflammation, abdominal surgery, abdominal trauma or obstruction of developed lymphatic vessels.Although small bowel lymphangioma is a benign condition and normally clinically silent, it can present with symptoms such as abdominal pain, nausea, vomiting, and weight loss.Complications associated with lymphangiomas include bleeding, protein-losing gastroenteropathy, volvulus, and intussusception.According to Kida, 15 cases of bleeding small bowel lymphangioma have been reported from 1967 to 2012.While small bowel lymphangiomas are rare, it should be considered in a patient with clinically significant bleeding without an identifiable source.Our case allowed us to demonstrate the unique endoscopic appearance and complications associated with this rare entity. 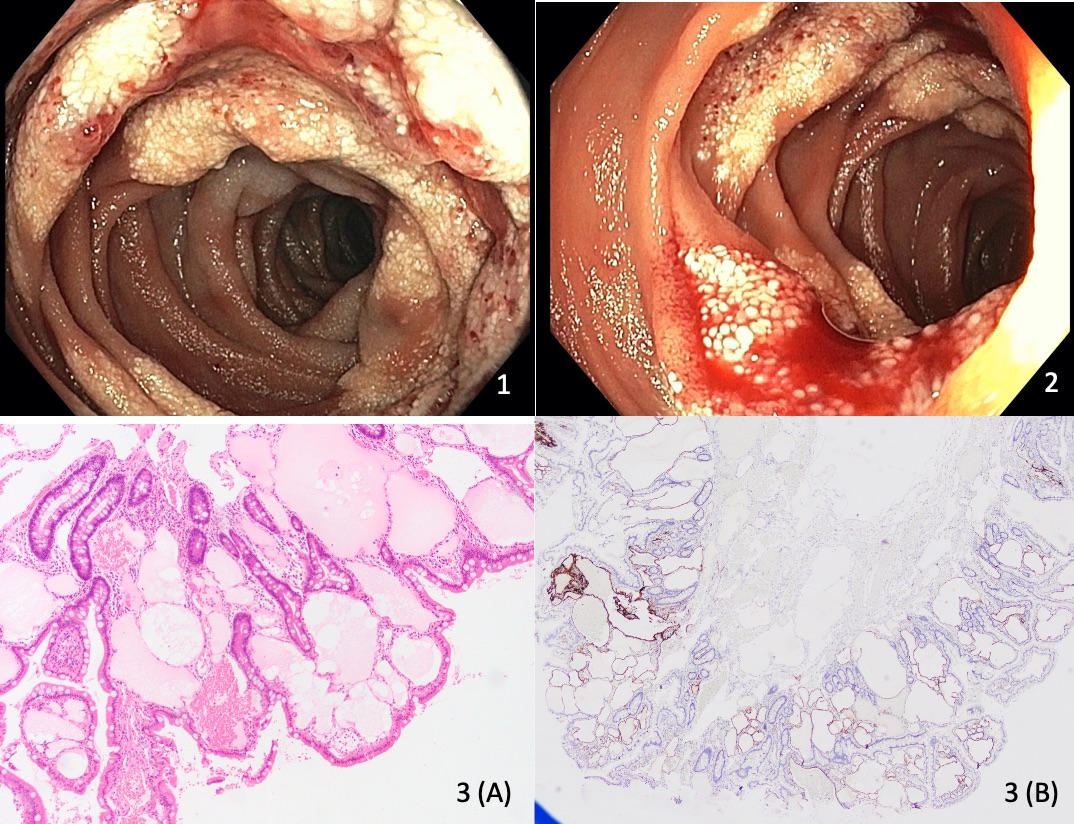