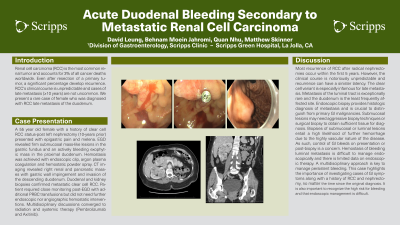 Introduction: Renal cell carcinoma (RCC) is the most common renal tumor and accounts for 3% of all cancer deaths worldwide. Even after resection of a primary tumor, a significant percentage develop recurrence. RCC’s clinical course is unpredictable and cases of late metastasis (≥10 years) are not uncommon. We present a rare case of female who was diagnosed with RCC late metastasis of the duodenum.

Discussion: Most recurrence of RCC after radical nephrectomies occur within the first 5 years. However, the clinical course is notoriously unpredictable and recurrence can have a sinister latency. The clear cell variant is especially infamous for late metastasis. Metastasis of the luminal tract is exceptionally rare and the duodenum is the least frequently affected site. Endoscopic biopsy provides histologic diagnosis of metastasis and is crucial to distinguish from primary GI malignancies. Submucosal lesions may need aggressive biopsy techniques or surgical biopsy to obtain sufficient tissue for diagnosis. Biopsies of submucosal or luminal lesions entail a high likelihood of further hemorrhage due to the highly vascular nature of the disease. As such, control of GI bleeds on presentation or post-biopsy is a concern. Hemostasis of bleeding luminal metastasis is difficult to manage endoscopically and there is limited data on endoscopic therapy. A multidisciplinary approach is key to manage persistent bleeding. This case highlights the importance of investigating cases of GI symptoms along with a history of RCC and nephrectomy, no matter the time since the original diagnosis. It is also important to recognize the high risk for bleeding and that endoscopic management is difficult. 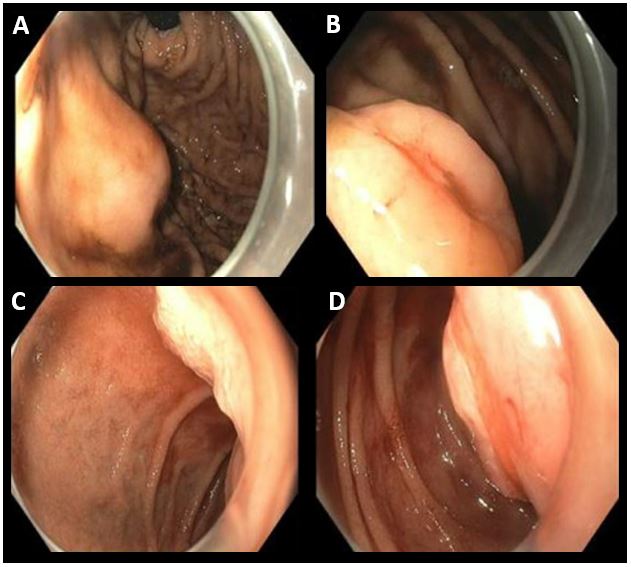