P3064 - An Incidental Neuroendocrine Tumor in the Duodenum 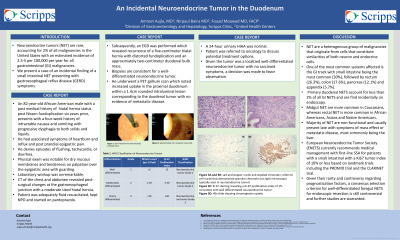 Introduction: Neuroendocrine tumors (NET) are rare, accounting for 2% of all malignancies in the United States with an estimated incidence of 2.5-5 per 100,000 per year for all gastrointestinal malignancies. We present a case of an incidental finding of a small intestinal NET presenting with gastroesophageal reflux disease symptoms.

Case Description/Methods: An 82-year-old African American male with a past medical history of reflux and hiatal hernia status post-Nissen fundoplication six years prior, presented with a four-weeks of intractable nausea and vomiting along with progressive dysphagia to both solids and liquids. He had associated symptoms of heartburn and postprandial epigastric pain. He denied episodes of flushing, tachycardia, or diarrhea. Physical exam was notable for dry mucous membranes and tenderness on palpation over the epigastric area with guarding. Laboratory workup was unremarkable. CT of the chest and abdomen revealed post-surgical changes at the gastroesophageal junction with recurrence of a moderate-sized hiatal hernia. An EGD was performed which revealed recurrence of a five-centimeter hiatal hernia with distorted fundoplication and a two-centimeter duodenal bulb mass. Biopsies were consistent for a well-differentiated neuroendocrine tumor. He underwent a PET gallium scan which noted increased uptake in the proximal duodenum within a 1.4cm rounded intraluminal lesion corresponding to the duodenal tumor with no evidence of metastatic disease. A 24-hour urinary HIAA was normal. The patient was referred to oncology to discuss potential treatment options.

Discussion: NET is a heterogeneous group of malignancies that originate from cells that constitute similarities of both neuron and endocrine cells. One of the most common systems affected is the GI tract with the small intestine being the most common (30%), followed by rectum (26.3%), colon (17.6%), pancreas (12.1%), and appendix (5.7%). Primary duodenal NETS account for less than 2% of all GI NETS and are often found incidentally on endoscopy. Midgut NET is more common in Caucasians, whereas rectal NET is more common in African Americans, Asians, and Native Americans. The majority of NET are non-functional and present late with symptoms of mass effect or metastatic disease, most commonly to the liver. Given their rarity and controversy regarding prognostication factors, a consensus selection criterion for well-differentiated foregut NETS for endoscopic resection remains unclear and further studies are warranted. 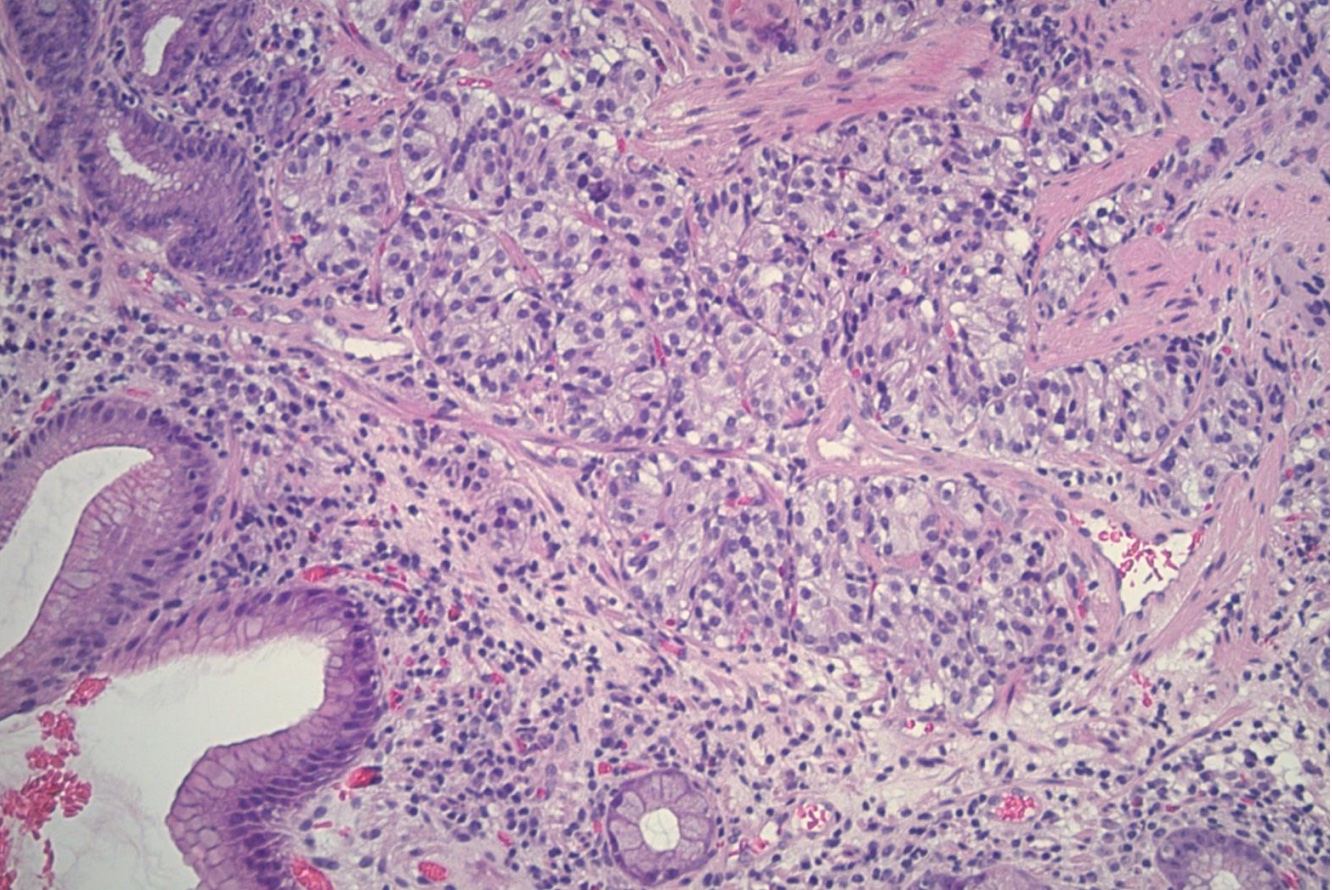