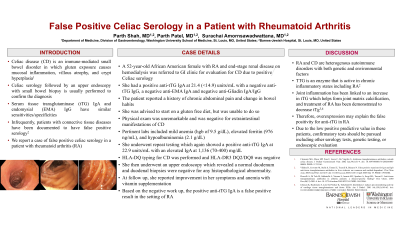 Case Description/Methods: A 52-year-old African American female with RA and ESRD on hemodialysis was referred to GI clinic for evaluation for CD due to positive Celiac serology. She had a positive anti-tTG IgA at 21.4 (< 14.9) units/mL with a negative anti-tTG IgG, a negative anti-EMA IgA and negative anti-Gliadin IgA/IgG. The patient reported a history of chronic abdominal pain and change in bowel habits. She was advised to start on a gluten free diet, but was unable to do so. Physical exam was unremarkable and was negative for extraintestinal manifestations of CD. Pertinent labs included mild anemia (hgb of 9.5 g/dL), elevated ferritin (976 ng/mL), and hypoalbuminemia (2.1 g/dL). She underwent repeat testing which again showed a positive anti-tTG IgA at 22.9 units/mL with an elevated IgA at 1,136 (70-400) mg/dL. HLA-DQ typing for CD was performed and HLA-DR3 DQ2/DQ8 was negative. She then underwent an upper endoscopy which revealed a normal duodenum. Duodenal biopsies were negative for any histopathological abnormality. At follow up, she reported improvement in her symptoms and anemia with vitamin supplementation. Based on the negative work up, the positive anti-tTG IgA is a false positive result in the setting of RA.

Discussion: RA and CD are heterogenous autoimmune disorders with both genetic and environmental factors. TTG is an enzyme that is active in chronic inflammatory states including RA.2 Joint inflammation has been linked to an increase in tTG which helps form joint matrix calcification, and treatment of RA has been demonstrated to decrease tTg.3-4 Therefore, overexpression may explain the false positivity for anti-tTG in RA. Due to the low positive predictive value in these patients, confirmatory tests should be pursued including other serology tests, genetic testing, or endoscopic evaluation. 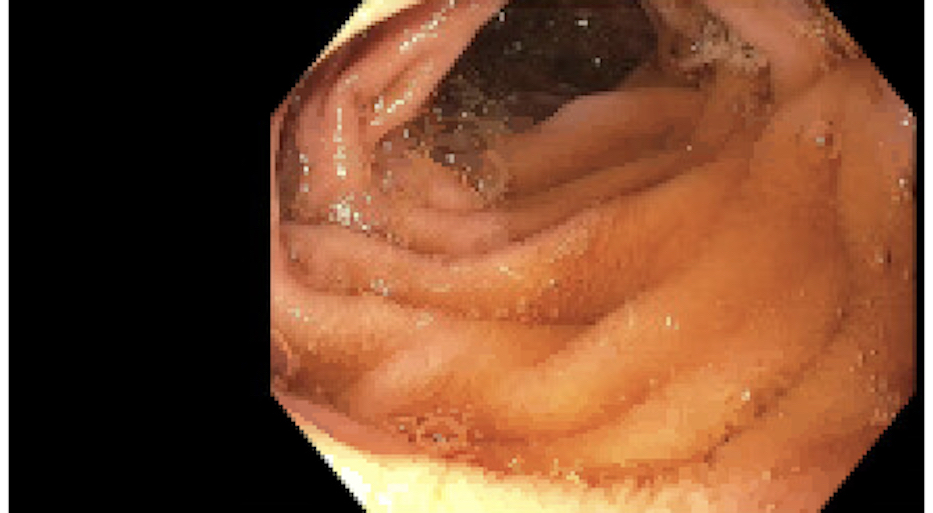