P3095 - An Unusual Cause for Persistent Anemia: Gastric Amyloidosis 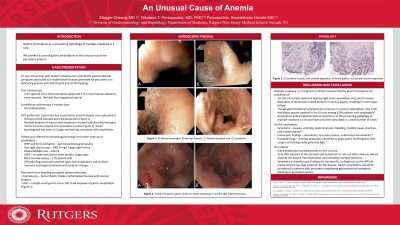 Introduction: This case highlights an unusual presentation of amyloidosis and multiple myeloma which was discovered during endoscopic and histological evaluation of the gastrointestinal tract for persistent anemia. Thus, it is important to consider these underlying malignancies during work up of anemia with proper biopsies and staining.

Discussion: Gastric amyloidosis as the presenting pathology of multiple myeloma is rare. Symptoms include abdominal pain, bleeding, motility issues, and malabsorption. Endoscopic findings most commonly show ulcerations, mucosal erosions, and submucosal hematomas. Because these findings are nonspecific, it can be difficult to diagnose unless the clinician has high suspicion for the disease.

In our patient’s case, the initial investigation was prompted due to persistent anemia. Unlike the typical mucosal abnormalities seen in gastric amyloidosis, our patient had grossly normal mucosa. Only after biopsies of the stomach and duodenum to rule out H. pylori and celiac disease were performed did we discover the patient had amyloidosis and ultimately multiple myeloma.